Yamaha Mio Sporty for sale in the Philippines April 2021 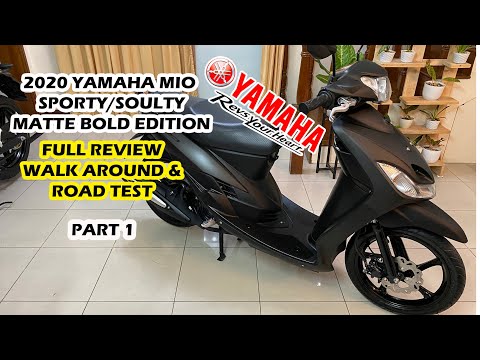 The Scooter for All Genders

Yamaha Motors Philippines launched the all-new Yamaha Mio Sporty with refreshing new colors, edgy body graphics, and a Euro 3 compliant engine. The Yamaha Mio Sporty now has the latest engine which is much safer for the environment as the toxic emission from it are now below the permitted levels under Euro 3 compliance. Equipped with the 113.7 cc engine produces 7.64 hp of max power and 7.2 Nm of peak torque. It's not just the engine which has been updated, but the Yamaha Mio Sporty has been revamped aesthetically as well. It now has a sharper rear-view mirror, a sleek body, with the stylish tail light, well-lit and clear instrument panel, thermal welded double seat, and a new silver painted exhaust muffler.

Yamaha still leads the market in the scooter segment for quite some time now, especially with its Mio line of scooters. Yamaha's latest Mio i125S and the Aerox 155 were also warmly received in the Philippines. The Yamaha Mio Sporty carries a price tag of Php 67,900 and is available in six vibrant colors- Matte Orange, Matte Black, Matte Grey, magenta, yellow and purple. The Yamaha Mio Sporty competes against the likes of the Suzuki Smash 115, the Honda Wave 110 Alpha, and the Honda Beat.

A New and Improved Yamaha Motorcycle

The Yamaha Mio Sporty features a trendy and sporty scooter design. Looking at the front of the vehicle are the handlebar which houses the headlamp and black colored edgy rear-view mirrors. It has that front apron features large turn indicators, with dual air vents and the famous Yamaha logo which is just below the handlebar. Now on the side of the motorcycle, there are some graphics and an embossed 3D MIO emblem along with a silver painted exhaust muffler. This emblem can also be seen on the front apron but only in non-matte color schemes. It also comes with a good and stylishly designed tail lamp and black colored single grab rail add to the rear looks of the Yamaha Mio Sporty.

The side panels have been redesigned to reflect a sportier stance. The tail light is big and bright which brings the youthful style of the bike forward. This will give you more support, comfortable riding posture, and a pleasant driving experience to any quick commutes or even longer rides. On the new Yamaha Mio Sporty, Yamaha has provided a feature called Thermal Welded Double Seat, which is tougher at the seams of the saddle. It also dissipates heat quickly to provide a comfortable riding experience which is very much useful in the Philippines. It also has the seat height of 745 mm, which should be easily accessible by riders of different heights.

Yamaha recently updated the engine of the Yamaha Mio Sporty to make it compliant with the Euro 3 emission norms. It is a 114cc, single cylinder, air-cooled, four-stroke SOHC engine, that produces 7.7 PS of max power at 8,500 RPM. When it comes with its torque, the engine generates at 7.2 Nm at 5,500 RPM. With the V-belt added, the automatic transmission comes in handy to provide smooth power delivery. Being Euro 3 compliant, this new engine on the Yamaha Mio Sporty is more efficient than its older version.

About its power, it is transmitted to the wheels using a V-belt automatic transmission. It offers both electric and kick starter options which are available on the scooter and its fuel tank capacity is 4.1-litre. When it comes with its braking system, it all rests with Hydraulic single disc up front and with the mechanical leading-trailing drum at the rear. Yamaha Mio's Sporty level of acceleration and power is set up enough stop even at higher speeds.

It is equipped with the 14-inch alloy wheels which are shod with a 70/90 tire at the front and an 80/90 tire at the rear. Tires are not tubeless, but they do provide a proper on-road grip. The Yamaha Mio Sporty is rapidly growing in Southeast Asian countries, which fulfills the demands of people, mostly for the younger generation that is extremely fond of these bikes.

Asking if this is still available

I'm lookiing for a 2nd hand Honda Mio Sporty ASAP, and paano mag inquire or bumili if meron? Thanks in advance.