The Toyota Wigo is one of Toyot's best-selling vehicle in the Philippines. It's a perfect choice for new car buyers or for a secondary car meant for driving in the city. The steering is considerably lighter than the previous model and as it now packs Toyota's VVT-I technology, the new Toyota Wigo is slightly more powerful than its predecessor. The Toyota Wigo may not be able to pack as much luggage as a normal sedan might. But remember that the vehicle is not made to bring luggage's but to bring its driver and passengers to point a to point b without a fuss in the most comfortable way.

The Toyota Wigo's strong point is cabin space. Despite its size. The vehicle can easily fit 4 adults comfortable with an ample amount of leg room and headroom. Both the front and back passengers should have no problem sitting in the vehicle even during long road trips or when stuck at traffic.

Toyota Motor Corporation is one the largest automobile manufacturer in the world which is headquarters in Nagoya, Japan. Thee 2019 Toyota Wigo is now made with a new gorgeous look, and some more new equipment as well, thanks to this year's improvement. Although it needs more boost when it comes with the engine performance under the hood. The Toyota Wigo is one of the most affordable brand-new vehicles you can purchase in the Philippine today. This 2019, Toyota Motor Philippines' entry level offers this new model for all young professional or those looking for their first family car.

Owning a Toyota Wigo is also a good investment. Rest assured that parts won't be scarce and durability should never be an issue thanks to Toyota's stature. Almost all of Toyota's vehicle are well applaud due to their durability, so you can expect the Toyota Wigo to be the same. The Toyota Wigo has been on the Philippines road now for quite some time. You can easily spot one everywhere you go. This also means that there will be demand for parts, so, even if you wish to hold the car for several years, finding the right parts when needed shouldn't be an issue.

The 2019 Toyota Wigo is very easy to drive thanks to its small wheelbase and round shape which helps for good visibility. The Wigo's A pillars may look thick but actually, doesn't cover that much or make your visibility poor. Even without a reverse back camera, you should be able to maneuver the Toyota Wigo ease, front, side and rear visibility are great as well as the standard height position. Experienced driver's may even feel like that their driving a golf-car since its really easy to drive. Female and novice drivers will definitely find the Toyota Wigo an easy to drive car. There's only a number of car on the road who can provide the same experience as the Toyota Wigo does.

The 2019 Toyota Wigo has been redesigned to sport a much more aggressive look. Its fold lamps looks identical to Toyota's currently selling sports car, the Toyota 86. Aside from the upgraded grille and foglamps, the Toyota Wigo also sports an illuminating turning lights on its side mirrors. The side of the vehicle has now more simpler lines. The refresh on the interior also added a new 3-point seatbelt positioning in additional to the vast amount of storage inside for you small items.

If you want to fit the Toyota Wigo a sportier look, worry not since Toyota is also offering TRD body kits ranging from the front bumper spoilers to a rear bumper spoiler with diffusers.

Across all trim-levels, the Toyota Wigo sports the same shoe. A 14-inch alloy wheels with machine cut design.

The Toyota Wigo also packs an econ light which indicates how the driver is efficiently burning gas. The econ light stays on as long as the driver applies the right amount of pressure on the pedal. The light goes off once the system indicates that the running condition is not fuel efficient enough. The Toyota Wigo is available with a 2-DIN touchscreen with GPS navigation support. Other trim level gets a 1-DIN CD and radio player.

The Toyota Wigo packs a 1.0-litre 3-cylinder VVT-I that promises more punch and fuel efficiency. it now makes 66 PS and 89 Nm of torque. Compared to its predecessor, there's no significant jump per say, but based on paper, there are actual updates. The engine is mated with either a 5-speed manual transmission or a traditional 4-speed automatic. The Toyota Wigo is no sports vehicle, but it packs the exact amount of punch you'll need for you daily driving inside or outside of the city. The 2019 Toyota Wigo is able to function softly on normal roads. Driving on rough terrains is not one of its strong points which shouldn't be a surprise in this segment.

Sadly, the Toyota Wigo is not equipped with a continuously variable transmission (CVT). It offers a standard 4-speed automatic transmission, just like its predecessor. Due to the vehicle's capacity, braking may also vary depending on the number of people or weight of the vehicle during driving.

The Toyota Wigo provides a very good visibility upfront thanks to its large windshield. Visibility on the side and rear is also worth complimenting as well. The larger windows also help in making the passenger feel that the inside of the vehicle is spacious.

Its not advisable to power shift on the manual Toyota Wigo. Driving smoothly is the most advisable setting to avoid sudden purges and humps. Being over taken by other vehicles may also surprise you as the Toyota Wigo easily tends to sway due to air waves produced by passing vehicles.

Steering and response is also one of its good point. Thanks to its short wheelbase and light body, the Toyota Wigo is easy to turn and maneuver in tight spots compared to its predecessor which sported a rather stiffer steering.

Although the driving position is far from the best, the lack of steering adjustment means that your will be the one that needs to adjust in finding the right driving position.

Suspension wise, the Toyota Wigo still sports the traditional suspension system which is more than capable in tackling the roads of manila. There are times though that the drive may feel like wavy due to the soft setting of the suspension. Body roll is also to be expected. Braking system wise, the Wigo doesn't come with front and rear ventilated disc brakes. Instead, it sports a 13-inch ventilated disc on the front and a drum brake system at the back.

Despite being one of the vehicles in the budget segment. The Toyota Wigo proud to let you know that it packs all necessary safety and driving aid that you will be needing on the road. The Toyota Wigo includes the comes with an SRS Airbags up front for both the driver and the front passenger. It also packs Anti-Lock Braking System (ABS), Immobilizer, Security Alarm, and Electronic Door Locks.

The Toyota Wigo takes some time before it builds up an ample amount of speed. Considering that it only packs a 1.0-liter engine, revving up the engine although may pull out power, expect minimal cabin noise coming from the engine as well as the tires. Sad to say, but cabin noise is not the Toyota Wigo's strong point.

The All-New Toyota Wigo's design looks livelier. With its new headlights that have a more distinct increase in both width and length, and has that stylish bug-eyed look. Compared to its predecessor which divided the grille into two parts, now its merged into one and is much bigger. This almost took up the entire front bumper. The trim bar pieces have a new designed which is now slimmer. It allows the engine to inhale a larger amount of air. The fog light shape is also changed which are no longer in a triangular shape.

For the rear design, it looks sportier than ever. The rear bumper now has two reflectors which are now on its two sides. The tail lights are bigger which takes up a little space of the tailgate. It also has that new wavy-designed spoiler, which is way better than the old flat wing before.

The 2019 Toyota Wigo interior is now offering a whole new design. From the usual colors of gray or black, Toyota puts some orange strings on the seats, some cloth with some trim on the door and even highlights on the touchscreen. Although the car molds are made completely out of plastic, which is a poor sign of stability.

Looking at its entertainment system, the new Toyota Wigo navigation module is now featured in the brand-new car. The audio can now be controlled while driving without any risks of danger thanks to new audio panel mounted on the steering wheel. This feature is not commonly found on other cars in this segment. It has a new update that enhanced the way that users will enjoy in-car music because of the added two speakers at the back of the car. But the center armrest is not part of the interior. And the steering column could not be adjustable.

Toyota is also offering a GPS navigation ready 2-DIN touch screen for the Wigo. Upfront, the instrumental cluster now sports a digital gauge that indicates which gear is currently running for the 4-speed automatic models. Econ mode is still available to help you drive the Wigo as fuel efficient as possible and the fuel gauge is still monitored via digital bars. Other than that, the speed and rev meter remains to be an analog type which is still very visible when driving.

For the vehicles space, the ideal number of people that could fit in the car is four. The inside space is capable of accommodating up to five people which can comfortably sit in the car without worrying about headspace and legroom. Trunk space behind is not enough for stuff for the overnight trip. You may want to fold down the rear seats in exchange if you need to carry more items. 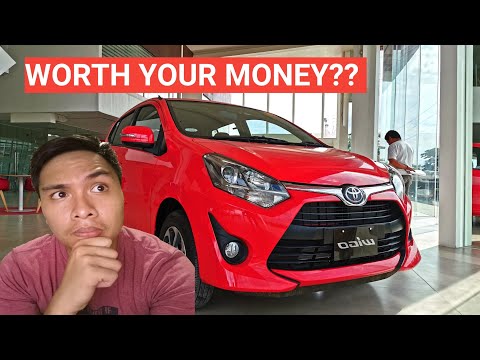 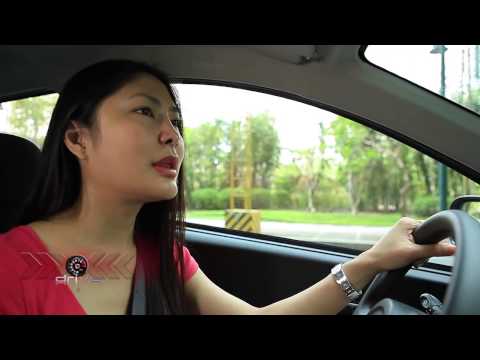