Toyota Rush is an entry-level Japanese sports utility vehicle (SUV). This model traces its roots to the Terios, which was first released for the Japanese market in October 1998. In Japan, the first generation Rush replaced the first generation Terios, but was eventually discontinued in March 2016, with the C-HR released in December 2016 as the successor.

The Toyota Rush first set foot on Philippines shores in May 2018, competing with the likes of the Mitsubishi Xpander and the Honda BR-V. It is currently available in five-seater and seven-seater variants and rides on the same platform used by the Avanza. Having been well-received by the Philippine market as a compact and relatively affordable entry-level SUV, it is currently one of the more notable models coming from Toyota Motor Philippine.

The Rush is a product of Toyota Motor Corporation, a Japanese conglomerate that has been manufacturing motorized vehicles for more than eight decades. The company ranks as one of the biggest car makers globally, with a production volume of more than 10 million units a year. It closely competes in the global marketplace with American brands General Motors and Ford and German Volkswagen Group.

The 2019 Toyota Rush is available in three trims, namely the five-seater 1.5 E MT and 1.5 E AT and seven-seater 1.5 G AT. The E variants carry a PhP958,000 and PhP998,000 price tags for the manual and automatic transmission options, respectively, with the top-of-the-line G costs PhP1,090,000. All three trims run on a 1.5-liter dual VVT-I gasoline engine, which also powers the Toyota Avanza. The base trim 1.5 E is mated to either a four-speed gate-type automatic or a five-speed manual transmission and can generate up to 102 horsepower at 6,000 revolutions per minute (rpm) and 134 Newton-meter of torque at 4,200 rpm. The 1.5 G variant, on the other hand, is paired with a four-speed automatic transmission to produce a maximum of 103 horsepower at 6,000rpm and a peak torque of 136Nm at 4,200rpm. It also comes with an engine start/stop button. All trims have a fuel capacity of 45 liters.

The Rush is a rear-wheel drive, which sets it apart from its front-wheel drive competitors the Honda BR-V and the Mitsubishi Xpander. The Toyota Rush uses ventilated discs for its front brake and leading-trailing drums on the rear. While the brakes are fine and respond quickly when driving in heavy traffic, slowing down in highways might require the driver to step a little harder and longer on the brake pedal and to adjust his braking distances. This model is well-endowed in the safety department. It received a five-star rating from the New Car Assessment Programme for Southeast Asian Countries (ASEAN NCAP) based on crash tests conducted in 2018. This is an improvement from the four-star rating that the Toyota Rush received in 2015, thanks to the addition of Electronic Stability Control, Anti-lock braking system, and seat belt reminder system.

All Toyota Rush variants also come outfitted with six airbags, including driver, passenger, front side, and curtain shield. Anti-lock braking system (ABS) with electronic brakeforce distribution (EBD) and Toyota vehicle security system are offered as standard. It is also equipped with traction control, hill start assist, and emergency stop signal. The G grade variant even comes with a back sonar and a back monitor with guideline to assist drivers when driving or parking in tight spaces.

The Toyota Rush delivers smooth handling, thanks to a tight turning radius of only 5.2 meters and power steering feature. The car uses MacPherson struts with stabilizer for its front suspension and a rigid axle with a five-link arrangement at the rear. Because the rear suspension is designed to bear weight, like those used in pick-up trucks, the Rush is stable on the front but bouncy at the back when driving solo. However, ride smoothens out once there is enough weight onboard. This SUV handles highways and expressways quite well but getting past slow-moving vehicles on two-way roads might require you to press on the gas pedal a little harder. The engine also struggles a bit once the car is packed with passengers and cargo or whenever it needs to go uphill. Wind and tire noise level is nowhere near Innova's, but just right at this price range. Noise, vibration and harshness (NVH) is more tolerable at the 80 kilometers per hour mark. The Toyota Rush is gifted with a generous 220mm ground clearance, 31-inch approach angle, and 26.5-inch departure angle. This means the car is more than capable of going over obstacles on the road and even flash floods.

The Toyota Rush is a relatively large car for its segment, although its proportions – tall stance and narrow body – make it look lanky. The Rush 1.5 E, which is designed for five passengers, measures 4,435 mm in length, 1695mm in width, and 1,705mm in height. The 1.5 G, which seats seven, is slightly more compact as it stands 4,190mm long, 1,660mm wide, and 1,695mm tall. However, a 220mm ground clearance allows Rush to fit into the SUV segment instead of being classified as a multi-purpose vehicle (MVP).

The Toyota Rush has earned the moniker "Baby Fortuner," mainly because it adopts the Fortuner's sleek and aggressive design, including the latter's angular styling. Nevertheless, even though it borrows a lot of design elements not only from the Fortuner but also from the Rav4, the Toyota Rush still manages to standout. The car's fascia features a four-slat chrome grille at the center and a pair of squinted LED headlamp and daytime running light on each side, which gives the car a striking look. Below these is a stout bumper flanked with small fog lights on the sides, which gives the car a somewhat aggressive look.

At the back, the rear door sports a top hinged design with LED rear combination lamps on each side. It also has a rear spoiler with a LED-type high mount stop lamp. As a bonus, the G Grade gets a roof rail to help hold any top load. Other noticeable elements from this view is a tailgate-mounted spoiler and a shark fin antenna. The Rush features high bodylines that give off an illusion that the car is taller than it is. Meanwhile, a short nose endows it a toy-like character, making the Rush a sporty and fun-looking SUV.

Inside the cabin, the Toyota Rush gives off an Avanza vibe stemming from layout of the controls, knobs and levers. The shifter, parking brake and air-condition vents are positioned the same way. However, it also has elements that take inspiration from the Fortuner and the Innova, such as soft-to-the-touch dashboard material and a mix of gloss-black and slivery surfaces.

The Toyota Rush gets a three-spoke steering wheel – leather for the G grade and urethane for the E variant – that is not exactly of premium quality but performs high in functionality as it holds controls for the car's audio as well as phone for the G trim. The buttons on the wheel are intuitive and easy to use, although it is not telescopic and may only be adjusted up or down, not forward or backward. The driver also gets multicolor optitron meter gauges with multi-information display (MID). The seats, which come wrapped in fabric instead of leather, are plush and comfortable, ensuring passenger comfort during long rides. Taller drivers, however, might find it challenging to find a comfortable driving position as the seat does not adjust low enough and the seat belts are fixed in place.

All variants come with a seven-inch capacitive touchscreen display that serves as the interface for the car's audio system, which includes a CD/MP3 player, AUX, USB port, Bluetooth connectivity, and Weblink for iOS and Android. The base trims E get six speakers, while the higher-end G carries eight speakers. Both E and G trims get dual climate control that use dials, which are less cumbersome to use than touch screen buttons. The top-spec option even comes with automatic air-conditioning feature.

The Rush's long wheelbase that measures 2,685mm allows for ample room for passengers inside. The E grade has two rows of seat to comfortably accommodate up to five passengers, while leaving a generous 514-liter boot space.

As for the G variant, it adds a third row of 50:50 split seats to take in two more passengers. It allows for big enough headroom and legroom for the front and middle-row passengers, but not much for those at the back. However, the 60:40 split second-row seats may be slid forward to provide more legroom for the rear passengers. Cargo room is also reduced to 213 liters in the G variant, although it is still enough to store several bags and maybe a cooler. Nonetheless, there is the option to fold up the third-row eats to get 514 liters of boot space.

One drawback that stems from the Toyota Rush's raised ride height while maintaining a good body proportion is the limited headroom. Taller passengers might have to scoot a bit when getting in and out of the car.

Rear passengers will appreciate the door-mounted cupholders – a total of 13 – that allow them to enjoy beverages during rides. Unfortunately, front seat occupants do not get cupholders. 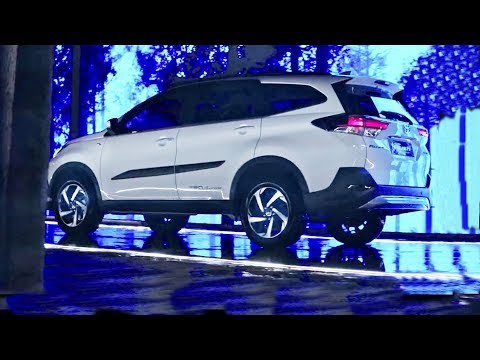 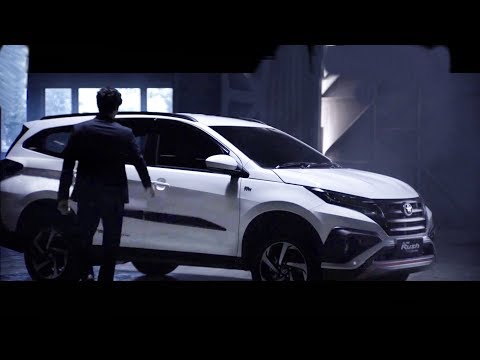