The Toyota Innova: A Spacious and Elegant MPV for the family

Amongst the best-selling vehicles of Toyota Motors, the Toyota Innova is a notable entry. It was first released in 2004 as an MPV, and now it has been released as a 2nd generation facelift version. The Innova features a magnificent appearance. The Innova, although being an MPV, has a sporty and graceful design that is associated with SUVs.

The angular grille at the front accentuates the powerful and sporty guise that the Innova exhibits. The sleek and thin headlights stretch back towards the sides to further complement the intimidating appearance. The shape has some shades of semblance to the Honda BR-V in terms of the elongated shape and the positioning of the chassis on the wheels. Moving on to the sides of the Innova, there are defined shoulder lines that run across the length of the car. The Innova has three windows on each side. The standard four windows are present as they are on most cars, but at the rear, there are trapezium-shaped windows that sweep upward. The angled profile and sharp construction of the different components of the car make it an aesthetic vehicle.

It is available in different variants, which include the V, G, E, and J variants. The J variant has the lowest price among the four variants. The lesser availability of features is the reason behind the smaller price tag. The G and E variants are the mid-level variants, and they include some additional features compared to the J variant. The V variant is the best variant in terms of the features and the provided attributes.

The different variants have some differences which set them apart and classify them into low, mid and high level. If you are looking to buy the Innova, then it is important for you to understand the various differences between the variants.

The V variant is the top-level version of the Innova. There are some features and some characteristics in it that are not available in the rest of the lineup. However, one of the main differences that you will see is that the E, G, J variants all have eight seats while the V variant only has seven seats. That is one thing you will find lacking in the V variant, although there are several other features that make up for it.

The E and G variants are available in both Automatic Transmission and Manual Transmission. The V variant is available only in Automatic, and J is only available in Manual Transmission. The prices for the six variants are as follows: the E variant with MT is around P 1,285,000, while the AT comes in at around P 1,355,000. The G variant with manual transmission comes at P 1,522,000, and the Automatic version has a price tag of P 1,592,000. The V variant has the highest price, which is, P 1,739,000 and the J variant has the lowest, at 1,186,000.

The prices should give you an idea of what the standing is of each different variant.

Engine: The Heart of the Innova

All the variants of the Toyota Innova come with 2.8 L engines with a displacement of 2755cc. The construction of the engines consists of a 4-valve/16-cylinder composition. Sixteen valve engines have a much easier time in taking air in and releasing it: the process is colloquially known as 'breathing.'

The Innova, being an MPV, has the main perk of seating around 7-8 passengers. This makes it a good vehicle to get if you have a family. But the engine and the performance of the Innova will soothe those adventurous palates of yours and leave little to be desired in terms of the driving experience.

Transmission: Make the Choice you want

In the four variants of the Innova, two are available in both Automatic and Manual transmission. If you are looking to buy the G or E variant of the Toyota Innova, then you can entertain the choice between manual and automatic transmission.

The Toyota Innova consists of several security-and-safety features. Some of them exist only in the V variant, and some exist in all of the members of the lineup.

Firstly is the Driver's Airbag. The Driver's Airbag is available on all four variants. Airbags are an essential safety measure that you must have. Most modern cars come with airbags, and so does the Toyota Innova.

Then there is the Front Passenger's Airbag. This is also available on all four variants.

Then, there is some exclusivity to be seen regarding the side airbags and the curtain airbags. These are only available in the V variant of the Toyota Innova. The side airbags are a useful measure in case your car suffers from a side collision. If you get into an accident at an intersection, then you will most probably face side-impact rather than back or front impact. In these cases, the front airbags are not that effective in cushioning you.

Similarly, the cushion airbags also deploy from the side. They are located on the top side of the door so that the driver and the passenger can be cushioned against the top side of the window. This can protect the head, which is the most important thing to protect in crashes and accidents.

There are various assist mechanisms and safety mechanisms in the Toyota Innova. Some are available on all variants, and some are exclusive to a few.

The first mechanism is the Electronic Brake Distribution (EBD). The EBD is a mechanism by which the brakes are applied with different pressures on the wheels. For example, the back wheels carry more weight than the front wheels. If an equal pressure is applied to both wheels when stopping, it can cause the car to skid. But with the EBD, the back wheel is applied with relatively low pressure than the front. This causes the car to stop without going out of control.

This goes hand-in-hand with the ABS. ABS stands for Anti-Lock Braking System. The ABS is also available on all four variants.

The Security Alarm is only available on the V variant. There are some things that are exclusive to the V variant, and this is one of them.

Electronic door locks are exclusive to only the V variant and the G variant (both AT and MT). Front and back parking sensors are also only exclusive to these two variants.

Inside the Toyota Innova

The interior of the Innova is as graceful as the outer façade. There are some differences between the variants with regards to the interior, the major one being the different number of seats for the V variant. The rest of the lineup features eight seats, while the V variant has seven.

The seats feature a material fabric for increased comfort and tranquility. The spacious interior, along with the construction of the seats, makes the Innova a comfortable ride. In the V variant, there are tray tables mounted at the back of the front seats for the use of the passengers in the second seat.

The cooling/heating system of the Innova is an Automatic Climate Control Air Condition System. An automatic Climate control System automatically detects the internal atmosphere of the cabin, and it regulates the airflow accordingly. Doing so creates an atmosphere that is comfortable for the passengers.

The seat adjustment in the Innova is made to bedone manually. Depending on how many people are sitting, you can easily adjust your seats to make your sitting space even more spacious. For longer journeys, having decent legroom is necessary. You can easily get nice and comfortable by manually arranging your seats.

The Toyota Innova has several connectivity options, which include Bluetooth, USB, and AUX. If you are inclined to connect your mobile phone to your car to make phone calls easier, you can easily do so.

To further accentuate this utility, the V, G, and E variants come with audio controls on the steering wheel. If you are traveling solo, you don't even have to take your eyes off the road to manage those phone calls. Everything can be done at the click of a button, situated right at your thumbs.

Like most modern cars, the Innova has a Power Steering mechanism. This mechanism basically allows you to steer your car very smoothly and easily. When you turn your car off, however, the steering wheel goes stiff and rigid. When you turn it back on, it moves like butter.

Similarly, the Innova has Power Windows, which means that you can operate your windows via pressing a switch. This is a usual occurrence nowadays in modern cars.

The Toyota Innova from the Outside: Graceful and Aesthetic

The appearance of the Innova is one of the main features that make it such a desirable vehicle. While the seating capacity, the features, and the engine are all impressive traits of the Innova, the exterior lends it its salient and outstanding status.

The wheels on the Innova are of different kinds. The G, E, and J variants have R16 size tires with a width of 205mm. The V variant displays its superiority over the other members of the lineup with its R17 wheels with 215mm.

With the V variant, you are not only getting some added features and nifty tricks with the car. You also have an upgraded physical appearance that is better than the lower-priced alternatives.

The E, G, and J variants of the Toyota Innova feature halogen headlights, unlike the V variant, which features LED headlights. Another difference in the lighting of the variants is the presence of clearance lamps on the V variant. Clearance lamps are installed to show the height and width of the vehicle for determining the clearance dimensions for the car. Similarly, the V variant has LED fog lights bordered with chrome bezels. The E and G variants also possess fog lights, although not LED. Rather, the fog lights on these two variants are also halogen. The J variant is deprived of fog lights altogether. 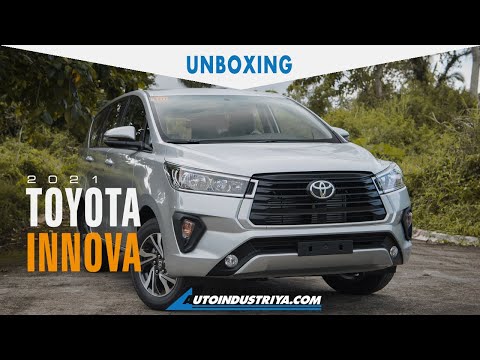 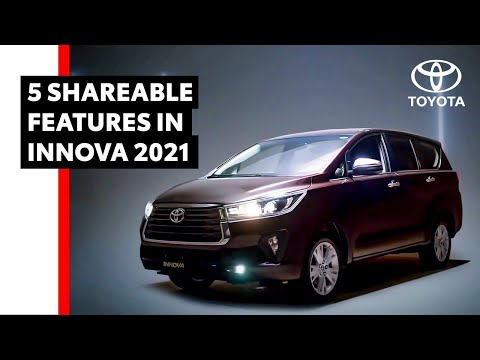