The pickup segment is heating up in the Philippines. Many brands and models are vying for the customers' attention. Japanese auto giant Toyota is one of them. Toyota is a name that is synonymous with quality, reliability, and durability. It has many models in its lineup that fulfill this criterion. The Toyota Hilux is one such model. It was launched way back in 1968 as a rough and tough pickup truck. Since then, it has continued to rule the roads and won admiration and loyalty among its customers' base. Over time, it has progressed and morphed into a utility vehicle with modern-day amenities. The major revamp occurred in 2004, the seventh generation model that embraced all the modern changes in terms of build quality, material, convenience features, construction platform, and of course looks.

The second notable revamp happened in 2017. It was not a drastic one like in 2004 but a few cosmetic changes were introduced both to the exterior and interior. Toyota Philippines has now introduced the seventh generation of this popular pickup truck in the country. It is available in as many as fourteen variants in the local market.

It offers the same level of dependability and ruggedness that is its hallmark. Plus, it embeds many new and modern features that make it ideal for daily city commutes as well. Let's delve deeper into this vehicle and analyze its features, performance, and other aspects that make it ever so popular.

The 2021 Toyota Hilux has been built for a rough and tough kind of terrains. It is meant to traverse every kind of surface and live with every type of harsh treatment. The materials used in its construction and their quality would vouch for that. It is produced on the same platform as Fortuner and Innova and comes with solid carrying capacity.

There are different transmission options available for different variants of the 2021 Toyota Hilux. There is a 5-speed manual, a 6-speed automatic with ECT, and a 6-speed manual. The 4WD variant has an auto-disconnect differential at the front and an in-built differential lock at the rear end. The suspension comprises of a double-wishbone set up for the front and a hard axle with coil spring for the rear. This has improved the drive quality of the 2021 Toyota Hilux considerably. A crown wheel pinion with a power assist steering wheel further improves the ride quality. It is easy to maneuver and handle, even when negotiating sharp bends, tight turns, and corners, its big size notwithstanding. The drive is not bouncy or bumpy at all; like you would expect from a pickup truck. On a smooth road, it runs like a breeze. You may not feel like you are driving an SUV but it gets close, nevertheless.

It is worth noting that the suspension for this vehicle has been revamped. It is now well-adjusted to cater to your off-roading adventures. It is equipped with off-road friendly technology, like for example a hill descent control and a rear differential lock. A low-range gearbox is also part of that strategy. All these measures make it extremely capable of running off the beaten track (pun intended).

Toyota claims that the engine is 4-5% more fuel-efficient than its predecessors. The introduction of new eco-technology has helped matters here in this regard. There are still more frugal options available in this segment from rivals but its fuel economy is not bad either. It averages around 29-32 MPG. CO2 emissions are also under control and checked to keep in mind the prevalent environmental standards. The steering is light and very easy to control and handle. The braking is also very sharp and state-of-art. It employs disc brakes at the front and brake drums for the rear wheels. The braking is ABS and there is also EBD that further consolidates the performance of the brake.

In short, Toyota has built a sturdy pickup on a ladder-on-frame chassis that has all the right mechanical dynamics in place. It is a responsive car with a powerful engine, that is strong enough for normal day to day driving. It is a multipurpose car that you can adapt to different uses according to your own needs. You can use it for carrying a load, towing, off-roading, and even as a consummate family car. The company wants people who want an SUV but can't afford one, to go for this light pickup truck. Let's see how successful they become in their pursuit.

A menacing look to do all the tough work

One look at the 2021 Toyota Hilux and you know this vehicle means business. The macho and muscular look is both awe-inspiring and practical. It had to look big and strong because it is meant for tough duties. The front has a square look. The headlamps and the hood contribute to this look. They are both squares to a rectangle in shape.

The big and broad theme looks prominent in other parts of the front too. The grille itself is large and presents an imposing look. The shoulders over fenders are also flared out to create a bigger look. The designers wanted to create a bulky look for the 2021 Toyota Hilux and they did everything in their capacity to achieve that. But the good thing is, it was not done at the altar of aesthetics. The 2021 Toyota Hilux does look good and attract attraction, and there are no two opinions about it. The bold body lines are sleek and take to the end with seamless perfection. The large bed at the end may have also prompted the designers to create a large front. There has to be a balance in design to make asymmetric whole and it was achieved with success.

The LED headlamps are adjustable and so are the tail lamps. The fog lamps are also present to increase visibility under poor visibility. A pair of stylish LED DRLs also adorn the headlamps. As there are many variants on offer, so the specification of lights varies. This is especially true for entry-level or base models. If not LED, then the headlamps comprise of multi-reflector halogen lamps. Again depending on which variant you go for, the size of the alloy wheels ranges from 15 to 18 inches. The allow wheels are standard in all the variants though.

The dimensions of the 2021 Toyota Hilux are 5,345 mm in length, 1,855 in width, and 1,815 in height. It is longer, wider, and taller than its predecessors. The total radius of the wheelbase is 3,085 mm. This makes for increased cabin space despite the presence of a large bed in the rear. The side look of the 2021 Toyota Hilux makes an interesting profile. The double-cabin design and the large loading bed make the side view stand out. The use of chromes on the rear bumper and the rear door handles give the vehicle a very high-end look.

The side-view mirrors are also big, keeping in view the bulky body of the vehicle. But it is practical as well as it offers far and wide visibility. Some other highlights of the exterior include; a beefy front bumper, wide tire over-fenders, a much-needed side step, graphic designing at the tailgate, sports bar, electric outside rearview mirror with turn signals, chromed door handles, a B-pillar that has been blacked out, and roof ornament. The 2021 Toyota Hilux might not soft good looks but it does manage to stand on its thanks to its multiple strengths in areas like performance, technical and mechanical prowess.

A fine blend of functionality with refined aesthetics

A very appreciable thing about the 2021 Toyota Hilux is that despite being a pickup truck, it has a very well laid-out cabin laced with all the amenities of a modern car. This makes it attractive for a city dweller as well. Probably the makers wanted to enhance the appeal of this pickup truck and tap into some new segment of the market. How far they will be successful in this is hard to tell. So far, the average Filipino consumer is not ready to accept a light pickup truck as a family car for a city commute.

Maybe the younger segment of society might get tempted and buy it for doing some wild off-roading or country traveling. But it is good to see car companies are breaking the stereotypes and repackaging their models in unconventional ways to broaden their appeal. There is plenty of space inside the 2021 Toyota Hilux. The cabin is wide and spacious, to say the least. You won't feel any lack of legroom or headspace and this goes for the driver as well as the passengers. It can very comfortably accommodate five adult passengers.

The interior has been designed with good taste and fine aesthetics in mind. Once inside, you will forget that you are inside a pickup truck. There is a blend of plastics, composite material, and leather on display here. Everything looks refined and of premium quality. The presence of satin chrome trims and a dashboard with identical satin chrome finishes look pleasing to the eyes. As the 2021 Toyota Hilux share many production components with the Fortuner, the inner is where this inspiration is very evident. You will see many common design elements between the two. The seats are large and cushion you well. The fabric upholstery is plush. You might be surprised by the presence of a large, 8-inches touchscreen infotainment system. There are steering mounted controls as well.

The steering wheel itself is wrapped part in fabric for better grip and aesthetic appeal. The car is laden with convenience and safety features to give you a ride that is both comfortable and safe. There is a new 4.2 inches TFT multi-information display. Both Android Auto and Apple CarPlay are now available to easily attach your mobile phones to the vehicle. The top-of-the-line variants also get a smart entry system, keyless entry, and push start.

Airbags have also been provided, their number varies according to the choice of your variant. Other features to ensure safety include; seat belt warning, rear seat belts, hill start assist, traction control, electronic brake distribution, day/night rearview mirror, parking sensors, crash sensor, front and side-impact beams, check engine warning, door ajar warning, etc. These are the maximum number of conveniences, performance, and safety features in the 2021 Toyota Hilux. Their availability depends on the variant you choose for yourself. Check your local dealership to get to know the exact and accurate number of features for your variant.

It is now time to highlight some good and not so good aspects of this vehicle. We will start with the good ones first. 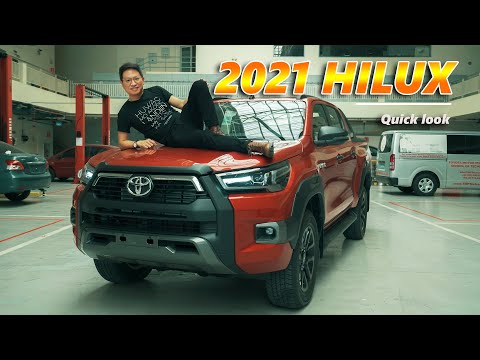 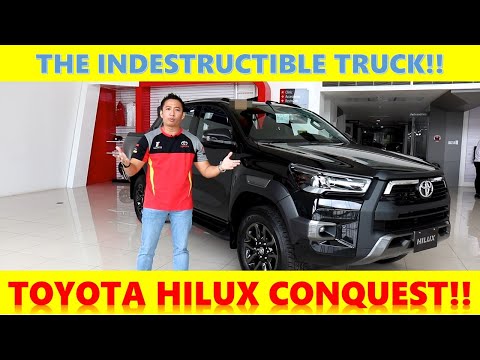