Toyota HiAce: Still The Best Family Car in the Philippines

Since its first foray in the Philippine auto market in 2005, the Toyota HiAce's reputation as a utility-slash-family-van in the country has never shied away from being consistently popular. This is all due to the van's competent engine offerings and a design that caters to two of the most sought-after uses in virtually all cars around – commercial and personal.

And due to its consistency in these respects, the need to effect any major changes in its overall design and specifications isn't needed. The Toyota HiAce is a perfect choice for the people whose basic requirement is a wider cargo capacity with standard features. The Toyota HiAce is one of the most appealing van vehicles in the Philippines- and for good reason. It has a clean exterior with chrome accents which makes it an excellent choice as either a family van, a business vehicle, or even as the official office ride. Meanwhile, the Toyota HiAce's popularity in the domestic market is warranted since its base variant is also one of the most affordable options.

Right below, we reveal the features of the new HiAce that are now considered to be a "big leap" in its years-spanning series:

Best Toyota All-rounder Vehicle in the Philippines - The Toyota HiAce is quite big and spacious; it has a box and big dimensions for its interiors. The reason for these features is warranted as the vehicle is mainly targeted to consumers who prioritize on providing comfort when carrying people.

The boot space can be increased further by folding down the rear row. Inside the vehicle, it will give you more comfort compared to other vehicles. The Toyota HiAce has dual air-conditioning and AC vents for each row, which is perfect for the summer day in the Philippines. For the car's dashboard, the placement of everything, along with their quality, seem to be extremely on the right spot. For its gear knob, it is placed on the dashboard which makes the front seat cluster cleaner and more spacious. In the right side, at the back of the front seat headrests, there are two screens which support DVD and could be the perfect companion for long drives. There are four seat rows in total which is claimed to seat an entire family of 11 members. And with its already spacious offerings, this also gives its passenger more-than-enough room to relax their head and legs all at the same time.

Fore mostly, the HiAce is all about providing possibly all the best of comfort and convenience for its rear occupants. Accordingly, the vehicle's second row is adorned with soft captain seats while Toyota opted to equip its third row with a single seat on its left and a bench for two passengers is provided on the right side. Ultimately, these latter rows' seats are also made soft and velvety.

This very feature of comfort and spaciousness of the Toyota HiAce's last seats easily makes it a standout in virtually all the automobile segments. Some of its rivals only offer a certain amount of comfort but don't nail it when it comes to providing an ample space down the line. The result could go from an overall awkward experience to actual discomfort.

The driver's comfort is also prioritized in the newest Toyota HiAce. As such the driver is given a commanding view of the road alongside an overview of his or her ride, conveniently being shown off on its average and real time fuel economy meter. Meanwhile, the vehicle's gear shift hand is also just about on the right spot that holds the gearbox assembly on the dashboard. This placement creates more space not only for the driver but also for the passenger at the front simultaneously. The Toyota HiAce's front windows also boast of power switches – a feature that is already considered as upscale in a commercial vehicle such as the HiAce. Also certain to be commended is the Toyota HiAce's powerful rear air conditioning system which passengers in the cabin are most grateful for especially when they look for the coolest one in the competition.

A slew of well-placed monitors right behind its front headrests can also be seen which should readily provide the right dose of entertainment during hours-long drives. Apart from these monitors, the vehicle also managed to include a great amount of storage which includes of bottle receptacles, cup holders, and an abundant cargo space; the latter is equipped with a staggering 6,000 liters. All things considered, the Toyota HiAce should easily impress even the most demanding of consumers relative to its interior needs.

The Toyota HiAce offers two stylish body types – the long wheelbase and the high-roof, wide body, super long wheelbase. The Toyota HiAce displays an exquisite styling and a perfect big size vehicle. It is bigger than any other minivans and which can accommodate so many passengers easily. The design of the new Toyota HiAce extremely shows that it is much of a van type. It has that upright posture and the slanting windscreen add to the attractive bits. Since it is a boxy design, the interior appears to be huge and every inch of the cabin can be utilized. Upfront of the Toyota HiAce is distinctly a feature that is recognizable for a van. It has that chrome grille and the large headlamps are unmistakably fitted in with absolute perfection.

It has sliding doors that are bigger and the B-pillars of the vehicle. It also brings about a halt at the monotonous window line. The Toyota HiAce rides on 15-inch wheels at all ends, which appear to be slightly smaller for a vehicle this big. The tires are quite thick to carry many passengers. For its old model, it has a 2.5-litre diesel engine that was always considered to be enough to drag 15 people nicely. But it could feel slow due to the lack of optimum grunt.

The new Toyota Corolla now has the 3.0-litre turbo diesel engine which is made up for the lack of grunt from its old model. It has the 2,982-cc, four-cylinder engine which can make a maximum power of 134 PS at 3,400 rpm along with a peak torque of 300 Nm, which comes between 1,200 rpm and 2,400 rpm. The power is sent down to the rear wheels through a 5-speed manual or a 4-speed automatic gearbox.

The Toyota HiAce is a 15-seater vehicle which only gets the manual transmission only. It has a good amount of torque which provides power to the wheels. The increase in 33 PS power and 40 Nm torque over the previous 2.5-litre engine feels good without being brash. The Toyota HiAce has a huge loading capacity and matched with a powerful engine under the hood. It offers a fuel efficiency of slightly over 12 kmpl.

The Toyota HiAce is not one of the safest cars in the Philippines due to its big size and more bus-like seating, but the features seem to be very much the same with other cars in its segment. It comes with two safety airbags which are offered as a standard feature of the vehicle, one for the driver and the front occupant. It also has an ABS which is also offered as a standard fitment across all the variants barring the low ones.

It lacks the electronic brakeforce distribution and stability control which makes driving at top speed, with the cabin completely occupied, and slightly scary. When it comes with the security features of the Toyota Corolla, it includes a vehicle immobilizer and a security alarm which are added to the equipment list to make it more relevant to the competitors. There also safety features inside, just in case you encounter a bad situation. Seat belts are fitted in for all the seats. The Toyota HiAce is available in 3 different color options - Black Mica, Silver Metallic and White Pearl Two Tone. 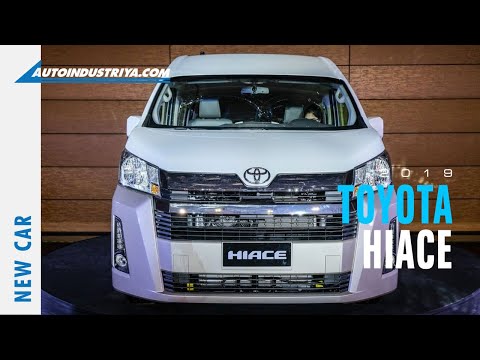 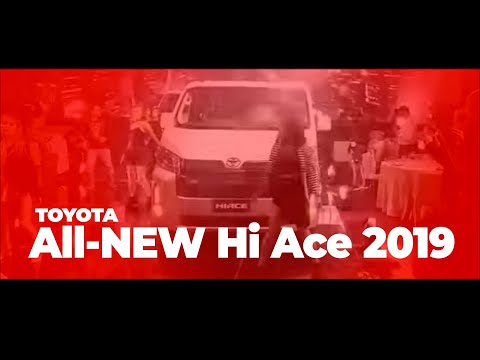