The latest refresh to have been introduced from the ardent series is now adamantly sportier – all thanks to its bigger grill plus its stance that is bother lower and longer. Overall, its design language borrows a hefty page from European influences. As such, its interior is now more premium than ever – and in the realm of the Camry, this attempt is already on the ambitious side.

At the moment, there are two variants to choose from – the 2.5 G edition and the 2.5V model. Both of these variants are equipped with 2.5L 4-cylinder engine, boasting a dual VVTi mated to a six-speed automatic transmission and drive heading to the front wheels. Numerically, its power figures are settling on a 178 PS with maximum torque at 231 Nm.

Its price point is very Camry, no less – one that sits very comfortably next to its competition. But when its safety features and top-grade perks are considered, you get to ultimately have a winning Camry in your hands. The Toyota Camry's price range starts from PHP 1,806,000 to PHP 1,992,000.

The Toyota Camry, is without a doubt, one of the most feature-filled contenders in its class. In this segment, we break them down to you right before we look into its performance, interior, and exterior quite extensively. First up is its robust and efficient V6 engine. Despite of the Toyota Camry being equipped with a 203 horsepower, with a naturally aspirated, inline-four-cylinder, the refresh comes with a rich 301 hp and 3.5 liter V6. In addition, the engine has also proven itself to be competitive relative to its fluidity and the broadness of its power band.

The Toyota Camry is also noted for its inclusion of a hybrid technology – one that makes a 208 horsepower hybrid drive unit readily available and can deliver up to 52 mpg in combined fuel economy.

The interior design of the Toyota Camry, as expected, has made some waves at the time of its release. Perhaps its show-stopping feature in this regard has to be its waterfall dash which is commended for its stylishness and great ergonomics. These key hallmarks are then combined with the Toyota Camry's head-up display, which is its next vital perk. Right in front of the driver is a 10-inch color heads-up display which shows critical information such as the car's speed and its turn-by-turn navigation instructions. There's also the Bird's Eye View feature that everyone's talking about. The system brings together the images from its camera to produce not only an overhead view but also a convenient view of the car from its side. Besides these views, the system is also able to do a sweep of the area surrounding the car. In the world of wireless amenities, the Toyota Camry also stands supreme. It is equipped with a QI wireless charger, located on the center console, right in front of the car's shifter.

Audiophiles are also treated with nothing but a prime feature, courtesy of the JBL sound system. This amenity is made more pronounced with a large subwoofer, situated behind the car's rear seats.

Other notable features of the Toyota Camry are its glass roof, the hot 19-inch black machined finish wheels, and a slew of safety perks such as the standard Toyota Safety Sense, pre-collision sensing, radar cruise control, and lane departure warning with steering assist. And for the ones who like to brag, the Toyota Camry is also equipped with a quad tip-dual-exhaust system – one that emits a thunderous albeit aggressive growl your neighbors will start talking about as soon as it revs up.

The Toyota Camry is available with the sole option of a 2.5 liters four-cylinder, petrol engine which is coupled to a 6-speed conventional torque converter. For its engine, it comes with a dual VVT-I technology, which can produce a maximum power output of 178 bhp and a peak torque output of 231 Nm. When it comes with the Toyota Camry's powertrain, it is more expected that the engine feels less on vibration and refined throughout the rev range and is almost silent at the idle. But you will notice that the engine is slightly thirsty as well, given the amount of performance it packs in.

Nowadays, modern electronic safety aids are an important part of the vehicle. The New Toyota Camry feels quite archaic, with the car though covering the basic safety features, missing out on the former contemporary aids. The New Toyota Camry, though, does come standard with safety features like front, side, curtain and knee airbags, front and rear parking sensors, ABS with EBD and BA, and vehicle stability control.

As it is, the Toyota Camry isn't exactly the most futuristic in terms of the up-to-date features and equipment. Nevertheless, the vehicle should still appeal to no-frills consumers and drivers who find that classics are still the way to go. Ultimately, this car is very much at the top end when it comes to comfort. And when a classic car gets combined with this feature, you can only be sure that you've won with a purchase like the Camry.

The interiors of the Toyota Camry have nothing much to praise for. The cabin has been styled in a very simplistic manner. However, its cabin provides a good level of sophistication and comfort. For its steering wheel, it has been restyled with different looking buttons for audio and calls, it even comes with aluminum inserts to make it look premium. It has the instrument console, with colored MID screen, which is probably the only cool thing you will find in this simple cabin. The Toyota Avanza's center console is the most heavily styled portion, with the mix of fake wood and aluminum inserts and several buttons making it looks plush. It is filled with buttons for climate control that might look confusing to use one by one. When it comes with the vehicle's entertainment system, there is a touchscreen music system misses out on modern bits like satellite navigation, Android Auto and Apple Carplay, which are a big miss in the Toyota Camry.

It is quite disappointing knowing the price bracket it falls in. The Toyota Camry is otherwise equipped with features like cruise control, tilt and telescopic adjustable steering, push-button start with keyless entry, leather upholstery and rain sensing wipers, however, given its price range, it feels lacking in many more comfort and more convenient features. Despite all, it still has its great feature that everyone will likely notice. This vehicle genuinely succeeds in comfort, the comfort levels are high with electric adjustments for all the seats at both front and rear and it even complements it with the generous amount of space it offers, it now feels more very comfortable than before.

The Toyota Camry has always been that one car which remains straight to the point with its no-nonsense looks which makes it look simply, yet elegant. The Toyota Camry sold in the Philippines is the last generation model, which looks too plain and slightly dated too in front of the all-new generation model being sold currently in other markets, however, it still looks on point. The Toyota Camry design in front has got a plain looking grille which gets a thick slat of chrome at its upper portion which ends up at the angular headlamps which come inbuilt with projector headlamps with daytime running LEDs.

For the front bumper, it comes with unique placements for fog lamps, which are situated at the lower end corners of the lower portion of the front grille and are enclosed in chrome garnishes. Looking at the sides of the vehicle, the Toyota Camry looks too bland for anyone to really love it. It doesn't even have any character lines or curves to make it look interesting, thus making the side profile look very boring and in isolation. It has its chrome finish on its waistline too which doesn't really help much to enhance the overall styling. The Toyota Camry rear carries forward the simplistic approach in its design with large tail lamps at both the sides connected with a thin strip of chrome, which does look elegant. For some, however, this design language might feel quite on the nose or bland if one has to look out for other trendier offerings in this class.

In terms of its aesthetics on its side, the Toyota Camry rightly suffers from the inevitable quality of a classic. As such, this section of the vehicle may appear a bit bland for some or a little too safe for others. There are no character lines or curves that can be gleaned from this section.

The Toyota Camry comes with the standard type of suspension setup, the MacPherson strut type with stabilizer at the front and dual-link which is independent at the rear. The suspension on the Toyota Camry has been tuned on the softer side to make it feel as comfortable and jerk-free on the inside as well. It also comes with a large 17-inch alloy wheel to aid much for that matter. The Toyota Camry measures almost 4800 mm in length, when it comes with the low turning radius of 5.5m, this is really one commendable strength of the vehicle. All these features, makes it feel quite easy to maneuver under traffic conditions, despite its large size. 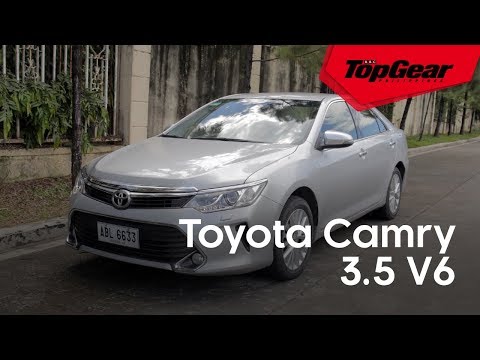 The current Toyota Camry is on its way out, but it's still a plush executive sedan 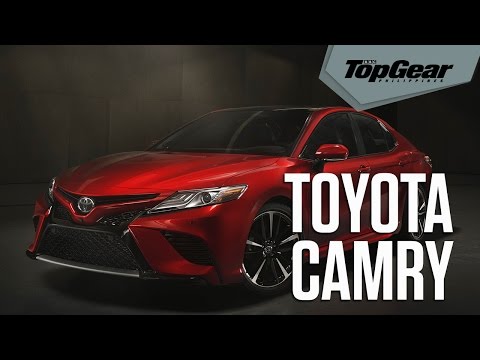