It was in early 2005 when Toyota finally replaced its last Tamaraw with the much more modern-looking, MPV-inspired Innova. Such a move then opened some room for a new entry-level people mover to slot right below the Innova. Finally, in 2006, three years after this variant was birthed into the Philippines, the Japanese automaker's new entry-level MPV – the Avanza – was ultimately launched.

At that time, the first-generation Toyota Avanza was developed by PT Astra Daihatsu Motor of Indonesia and was marketed understandably under the Toyota and Daihatsu branding in its home market. The series' first entrant paid homage to Tamaraw, with its retention of the familiar front engine-rear drive layout. However, unlike to the previous AUVs, the vehicle was notably smaller, lighter, and was positively toting around an almost car-like unibody construction. All things considered, the styling of the first Avanza was phenomenally simple albeit contemporary.

The current, second-generation Toyota Avanza debuted in the Philippine shores in early 2012. The latest borrows most of its design cues and performance features from the first Avanza. Nevertheless, that didn't stop to carmaker to still integrate some subtle refinements. While the shape is notably retained, the present variant is now wrapped in a new skin with a styling that is aligned with other Toyota variants across its global showroom floors.

In 2015, the Toyota Avanza received its first refresh. That time around, the new Avanza sported a more upmarket look, mirroring the modern needs of its consumers. Four years after, another facelift was given to the series – with its sporty design aspirations made even sportier than the former. Such prominence can be gleaned from its new grille, reshaped fascia, unique split headlights, with new taillights and wheels.

The newest refresh's interior offerings were also given a full makeover. The dashboard now looks more modern due to its sharper lines and more trim details. The Toyota Avanza's 2015 refresh also introduced a touchscreen infotainment system in its higher variants. The brand was noted to have added some improvements, particularly on the vehicle's NVH levels. Its 2019's refresh also received an updated infotainment system as well, besides its new digital AC controls.

Currently, the Toyota Motor Philippines offers two engine options for the Avanza, with both being the new generation Dual VVT-I 4-cylinder inline 16-valve DOHC engine for the 1.3-liter and the 1.5-liter variants. The brand's local arm has also released the Veloz variant in 2017 – one that is especially developed to cater to consumers with extra shot of sportiness in them. The variant comes with a unique fascia and a black fabric interior.

The refreshed Toyota Avanza is powered by updated DOHC gasoline engines which now feature Dual-VVTi. The vehicle's 1.3-liter mill now produces 95 HP and 121 Nm of torque while the larger 1.5-liter motor revs up 103 HP and 136 Nm of torque. Users can pair both powerplants to either a 5-speed manual or a 4-speed automatic transmission. As it is, it also retains its rear-wheel drive layout.

One of the highlights of the Toyota Avanza in this segment is its inclusion of an independent MacPherson strut front suspension, right alongside a coil spring live axle rear suspension with trailing links and a top-tiered Panhard rod. All that vehicle's variants also get to be vented by front vented disc brakes and rear drums. Meanwhile, its rack and pinion steering with electronic power assist system is also made standardized.

The newest refresh of the Toyota Avanza plays it safe relative to its interior features. The model serves up a look and feel that is decent enough for the upmarket crowd. It features a dual tone which is equipped with a few notable perks which include an advanced instrument cluster, 3-spoke steering wheel, AC vents, besides a large glove box.

The new Toyota Avanza also sports well-cushioned seats that are commended for its provision of an ample leg space. In addition, the seats also impress upon premium fabric upholstery while adjustable head restraints are also integrated.

The Toyota Avanza's second- and third-row seats are also noted for their sliding and reclining functions, which both aid in beefing up the vehicle's overall boot volume. Likewise, the driver seat also boasts of a power adjustable function which also happens to feature a proper lumbar support.

There's also a decent amount of sophistication that can be found inside the Toyota Avanza. This can particularly be gleaned from its molded and fabric inserted door trim adjusting, silver accentuated door handles, and parking lever. Other notable features in this section are its digital trip meter housed in its advanced instrument cluster, tachometer, door ajar and driver seat belt warning notifs, and speedometer, among others.

The Toyota Avanza also put most of its efforts in its provision of a number of top-tiered features right in its interior. It features an advanced 2-DIN audio system which is a great source of an enticing ambience in the cabin. It also comes with a manual HVAC. For the Avanza's top-end variant, its steering wheel is made multi-functional – one that is mounted with audio and call control. The variant is also made more accessible relative to the modern needs of its consumers. At the top of its accessibility features is the inclusion of 12V power socket placed in front and the middle row. This tier is also noted for its hydraulic power steering, all equipped with a tilt adjustable function, follow-me-home headlamps, cargo area light, and illuminated ignition key slots, etc.

As one of the best bets for a people-moving vehicle, the Toyota Avanza is also banking on its popular roomy internal cabin. The latest refresh can accommodate five to seven passenger, with just about the right room for head and legs. The latter offering is made plausible by its spacious boot compartment and a rear seat that can be folded.

The Toyota Avanza's 2-DIN unit features a CD/MP3 player, radio with AM/FM tuner, USB interface, and AUX-in port, all boosted with six speakers. Moreover, the vehicle is equipped with a roof-mounted antenna which should come in handy for casual FM radio listeners. All its audio controls are mounted on its leather-wrapped steering wheel, making its access more convenient for the driver.

The Toyota Avanza's cabin can also be decorated with a slew of add-ons such as a navigation system, touchscreen display, rear parking sensors, leather seats, body graphics, and a lot more.

Part of the charm of the Toyota Avanza's interior, especially in its most current refresh, can be found right in its sporty design aspirations. From the get-go, you'd know you're in for a sporty ride with its body-colored door handles and external rear view mirrors. It also features flared-up wheel arches, all fitted with a set of steel or alloy wheels. Meanwhile, its rims are covered with cool, high-performing tubeless radial tires which should readily provide a superior grip on any terrain. Sealing the deal is its black-colored styling tape placed on the B-Pillar, adding ultimately to the classiness of the MPV.

The same is the case with its front profile. Its slanting bonnet should catch your eyes at the onset, thanks to its slew of visible lines. Its radiator grille is also fitted with a single chrome slat and sports a prominent company logo right at the center. The grille is also complemented by a well-engineered headlight cluster which is incorporated with high-intensity, multi-reflector halogen lamps, besides the side turn indicator.

Another body-colored feature can be seen in its bumper, also well-crafted and is cladding-accompanied. For users who'd choose the top-end variant, there's also a cool air dam which is surrounded by bright fog lamps.

Toyota's expressiveness is also evident on the Avanza's rear end. The boot lid, in particular, comes with a chrome strip and variant badging as well. It also features a complimenting rear spoiler, one that comes with a sporty, high-mounted stop lamp. Its windshield also includes a defogger, plus a wash-and-wipes function.

Engineered as a multi-purpose vehicle, the Toyota Avanza is also noted for its large wheelbase. It measures about 2655mm, offering a spaciously comfortable cabin inside. Its steering wheel can support a minimum turning radius of 4.7 meters. Its entry-level variant features neatly-crafted wheel arches, all fitted with a set of 14-inch steel wheels, with full wheel covers as well. On the other hand, the other rims are equipped with a sophisticated set of 15-inch alloy wheels, fitted with 185/65 R15-sized radial tires which provide superior grip on any road surfaces.

In October 2017, the Toyota Motor Philippines announced the new Veloz edition of the Avanza MPV series.

Probably its most noted hallmark can be seen in its exterior, most particularly in its reworked front end. Now, while its headlights and upper chrome trim are still retained, its front grill is now painted in black to appeal to the more masculine consumers. Also added in the mix is the new Red Mica Metallic paint job, ultimately making the series more attractive to the more upscale market.

Right towards its rear, the Toyota Avanza Veloz exudes every bit of elegance. This is all evidenced by its smoked chrome trim piece that is mounted on the tailgate. The new Avanza variant also comes with a fresh rear bumper, all adorned with circular reflectors.

While the Veloz edition did undergo a significant revision, Toyota, for some reasons, wanted to uphold the familiarity that can be found in its predecessors' interior offerings. Fret not, however, as there are still nuanced albeit minor modifications that can be gleaned especially when one's eyes are trained.

Perhaps the most apparent in this regard is the all-black trim as opposed to the traditional dual-tone look. Also noted are its gear level and steering wheel which are now both wrapped in leather. For consumers who find its minimalistic cabin a bit on the noose, there's also a nice contrasting touches of faux metal finishes right on its dash and door handles.

Also retained in the new edition is the Avanza's top priority to keep its passengers comfortable and entertained. As such, its traditional infotainment system is still sourced from a 6.2-inch touchscreen display which supports CD, AM/FM radio, USB, Aux-in, and Bluetooth connectivity; the satellite navigation system has also been standardized. Finally, the screen resolution, sound quality, and date graphics of the Veloz have all been subjected to an upgrade.

Other notable features include the high-driving position from the driver's seat plus the accompanying large windows, culminating to a vehicle that gives a commanding view of the road. Perhaps the only drawback that is still largely present can be found in its not-so-comfortable front seats. Nevertheless, its shoulder support has been beefed up while the legroom in the second row is now noticeably more abundant. Also, its backrests can be reclined when such a need arises.

For users of the previous iterations, the third row seat can be especially limited. That is now all changed with the Veloz as it can accommodate teenagers and short adults all at the same time.

Also retained in the Toyota Veloz is the 1.5-liter 4-cylinder Dual VVT-I engine which revs up 103 PS at 6,000 rpm and a peak torque of 136 Nm at 4,200 rpm. Converting its power to considerable numbers on the speedometer is a 4-speed automatic transmission which works smoothly with a rear-wheel drive system.

Relative to its fuel economy, the new Toyota Avanza Veloz sits between 7.5 – 8.0 km/L in the metro. On highways, the variant can easily transition to an average of 13.0 – 14.0 km/L of fuel. The Veloz has also retained all the list of safety features found in the previous iterations. Specifically, this MPV provides a driver and front passenger's airbags, electronic brake distribution, ABS (with electronic brake-force distribution), immobilizer, security alarm, electronic door locks, and ISOFIX. 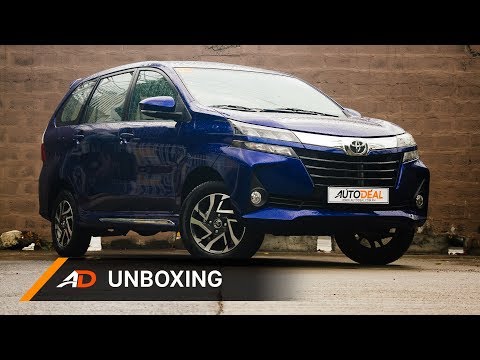 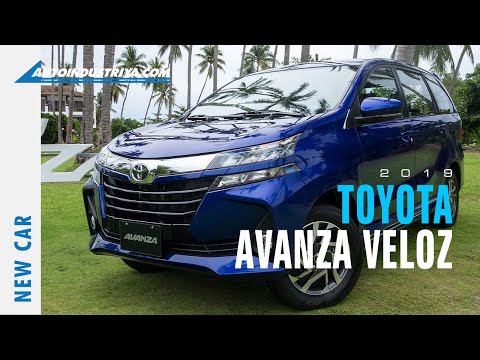