The Toyota 86 is a 2x2 sports couple and is a product of collaboration between prominent Japanese car producers Toyota Motor Corporation and Subaru Corporation. The model was developed alongside the Subaru BRZ and today continues to be built at a Subaru assembly plant in Gunma, Japan. Many elements found in the 86 were inspired by an earlier Toyota Corolla variant called the AE86, which is a compact, front-engine/rear-drive car that became popular as a rally and drift racing vehicle. Notable characteristics of the 86 include a naturally-aspirated boxer engine, rear-engine and rear-wheel drive setup, low center of gravity, and 50/50 front/rear weight balance.

While this model is marketed as Toyota 86 in most markets, including Asia, North America, South America, Australia, and South Africa, it is sold as Toyota GT86 in Europe, the Toyota FT86 in Nicaragua and Jamaica, and GT86 in New Zealand. It was also known as Scion FR-S in the United States and Canada from launch until 2016, when it was rebranded as Toyota 86.

After much speculation that the nameplate would soon be phased out due to low business performance as more and more customers prefer sports utility vehicles (SUVs) and crossovers, many fans of the model are excited to hear the news of a second generation 86, which will continue to be developed alongside the Subaru BRZ, arriving in the global marketplace. No timeline, however, has been specified.

The Toyota 86 is just one Toyota's comprehensive lineup of vehicles that include sedans, hatchbacks, SUVs, multi-purpose vehicles (MPVs), vans, sports cars, buses, hybrids, and pickup trucks. Toyota is a multinational Japanese conglomerate that has been in the business of manufacturing motorized vehicles for more than eight decades. The organization ranks as one of the biggest car makers in the world, closely battling with American brands General Motors and Ford and German Volkswagen Group. The car maker serves the global market, with strong presence in Asia, Middle East, Europe, North America, Latin America, Oceania, and Africa. With more than 350,000 employees worldwide, it operates 66 manufacturing and assembly facilities and 15 research and development centers located in several countries.

Under the hood of each unit is a 2.0-liter naturally aspirated four-cylinder direct-injection 4-stroke petro boxer engine that is attached to either a six-speed automatic transmission with paddle shifters or a six-speed manual gearbox. Those who use the car more for city driving will appreciate the automatic trim as it is equipped with paddle shifters that offer excellent shift quality. It also comes with a shift lock mechanism. Meanwhile, those who use the car on the highway or race tracks will most likely prefer the manual version because of the light clutch with which the driver can revv the engine with relative ease.

The model has a maximum output of 197 horsepower at 7,000 revolutions per minute (rpm) and can generate a peak torque of 205 Nm at 6,400 to 6,600 rpm. It has a top speed of around 225 kilometers per hour (km/h) and can sprint from a standstill to 100 km/h in only eight seconds. For its braking system, the 86 uses a 16-inch ventilated disc on the front and a 15-inch one at the rear. To make sure that it can handle road obstacles with ease, it uses a MacPherson Strut-type on the front and double wishbone on the rear suspension setup.

In terms of power and practicality, the Toyota 86 is on the humble side, but its handling is direct and easy-to-manage. Additionally, it has some features that make it a fun-to-drive entry-level sports car.

With only 130 mm ground clearance, the 86 is clearly not designed to haul passengers and cargo. Hence, it would be wise to keep the number of passengers low and the luggage light. The Macpherson suspension set up at the front is decent, and this facilitates for an acceptable overall ride quality. The electrically assisted steering wheel emits a direct feedback, so one would wonder if it would have been better if a hydraulic setup was used instead. Noise, vibration and harshness level seen in the 86 is generally decent.

Even though the safety features found in the 86 could be more, the car generally did well in crash tests done by several independent bodies. The 2019 Toyota 86, for example, did well in the testing done by Insurance Institute for Highway Safety, a U.S. nonprofit organization that aims to reduce incidences of car traffic collisions as well as the rate of injuries and value of property damage in the crashes. The model received the highest rating of "Good" on moderate overall front, side, roof strength, and head restraints and seats and the second highest rating -- "Acceptable" -- for driver-side small overlap front.

From an exterior styling perspective, the 86 has the elements that a sports car would traditionally have – long hood, sloping roof, low and wide stance, and an angular fascia. This may mean that the 86 has an outdated look, but some may view it as having an old-school appeal. Overall, the Toyota 86 still manages to look handsome in an old-fashioned way.

The 86's fascia is styled with a long and sleek hood that flows downward. The thin and angular LED headlights with LED clearance lamps are spread wide apart and come equipped with a light control system, automatic levelling, and cleaners. Below each headlamp is a front fog light that is enclosed in a black frame. The 86's radiator grille has recently been updated. It is black with a T-mesh design and sits low on the car's front end. Angular side mirrors jut out on the sides. A side view of the vehicle will give one more appreciation of the 86's old school body lines. The pattern of the car's 17-inch alloy wheels wrapped in 215/45 R17 tires have also been changed in the latest iteration. The rear end of the 86 looks particularly tidy. The tail lights are carbon copies of their front counterparts. On top is a high-mount brake light and a fin-type antenna for the car occupant's music needs. This model gets dual exhaust tail pipe and diffuser with cutter neatly arranged on either end of the rear bumper. Prospective buyers of the 86 may choose among several color variants. These are Crystal White Pear, Ice Silver Metallic, Bright Blue, Lapis Blue Pear, Dark Gray Metallic, Crystal Black Silica, and Pure Red.

Looking inside, the interior looks basic with simple flowing lines but the material used is noticeably of good quality and build. The cabin does not have a lot of adornments but whatever is there looks functional.

The interior sports a black and red color setup. The door trim is moulded with leather, adding a luxurious touch to an otherwise spartan interior. The inside handle for the door comes in chrome. Meanwhile, the steering wheel is wrapped in three-spoke leather with red and silver accent and embedded on it are audio switch and for the convenience of the driver. Behind the steering wheel is a meter gauge with digital speedometer and shift light and a 4.2-inch TFT multi-information display, which is on the minimalist side, showing only the most important driving data. Details shown to assist the driver include digital clock, light remind warning, key remind warning, door ajar warning, and seatbelt warning.

All seats come wrapped in leather with red accent and read stitching. The front seats are well-bolstered, offering occupants a comfortable ride. The driver's seat may be reclined, slid forward and backward, and adjusted vertically. The front passenger may be reclined and slid and it features a walk-in system to give way to those who need to squeeze into the rear seats. Both front seats come with a headrest with vertical adjust. The car comes with a united, bucket-type rear seat that also folds to provide more boot space.

The 86 can accommodate four passengers, but it would be better to treat it as a two-person sports car. There is decent head and legroom up front, even if occupants wear a helmet. Additionally, legroom can still be augmented by sliding the seats backward. The two-door setup, however, leaves limited knee, leg, and headroom for passengers at the rear. Hence, for maximum comfort, it would be best to keep the number of passengers to one or two. For a sports car, the trunk space may be considered decent at 6.9 cubic feet. The 17-inch spare tire lying inside the boot space leaves little room to hold other things. There is enough space for a small or medium-sized bag or some grocery bags but it may be too cramped to fit in a large suitcase. A few cup holders scattered around the car allows drivers to hold water bottles and other small items.

To keep the car occupants entertained, Toyota outfitted the 86 with a seven-inch touch screen infotainment system available on all trims. This supports CD, DVD, USB, AUX, and FM radio. Wireless mirroring is also provided through WiFi connectivity. Sound is blasted through four speakers; quality is mediocre but the multimedia display has a good resolution. 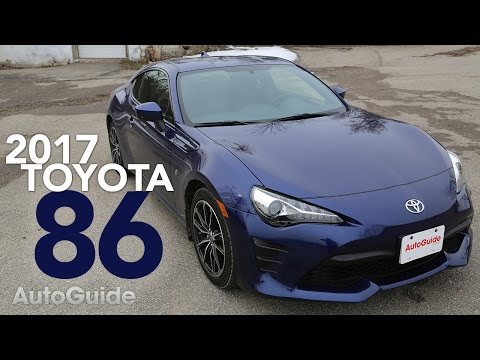 SEE ALL ACCESSORIES & PARTS for Toyota 86