The Suzuki Vitara can be defined as an automobile that gives you a luxury experience for a reasonable pricing. The look of the car is quite bold, making it stands out when compared to other cars of the same style. The vehicle comes with only one option of the engine – 1.4lt petrol that comes with a mild-hybrid technology – along with a choice of three levels of the rim. The top model Suzuki Vitara has a four-wheel-drive option available.

The Suzuki Vitara goes head to head with other small SUVs like the Skoda Kamiq, Seat Arona, and the Volkswagen T-Cross; these are some of the best small SUVs that are put up on the market. The Grand Vitara also takes on the Ford Puma that also has a mild-hybrid system. This system helps in reducing fuel costs and adds an extra boost to the automobile's performance.

In looks and feel, the Suzuki Vitara is very car-like. It is made with a slightly less rugged frame when compared to Suzuki's regular automobiles. This is the most stylized Vitara to be put up on the market, but when you hop inside the car, you will feel that it could have been a lot better—especially when compared to the rival cars of the same specifications.

The Suzuki Vitara is one of the best performing small SUVs in its price range, and we will be taking a look at all the different features and specifications below.

Even though The Suzuki Vitara comes with only one engine, it is quite commendable – a 127bhp 1.4lt petrol. It might be saying hybrid on its rear end, but the technology under the bonnet is mild-hybrid actuality. It is said that it gives a shot of extra performance when it is under acceleration, but we highly doubt you'll even be able to notice it. That does not imply that The Suzuki Vitara is a slow vehicle because it has got quite the speed for a small SUV.

The Suzuki Vitara has got a power delivery that is smooth and strong, and it has got plenty to go up to the motorway speeds or to overtake a slow-moving tractor in the country-side quickly.

When comparing numbers, the Suzuki Vitara appears to be faster than Ford Puma and also the Volkswagen T-Cross. The four-wheel-drive edition adds an extra 70-kgs to the car through the various additional mechanical components, making it a little slower on paper.

The Suzuki Vitara has a well-damped suspension, which is relatively firm. Only when going through big bumps, will you feel a small thud inside the vehicle, else the car rarely unsettles or jars.

So yeah, the overall suspension of the Suzuki Vitara is pretty decent. This car goes around the corners pretty well, but the steering is kind of a let-down being honest. It feels very light on the steering when you start turning it, and there is a connection felt with the front wheels. It is best suited for driving around the town, where it will help you to fit into parking lots and go around tight turns with a lot of comforts.

The mild-hybrid system addition over the last generation's Vitara makes only a very little difference in handling thankfully, adding only an extra 15 kg. There's not a heap of excess baggage weight being thrown around with the new feature.

When it comes to noise, the car's engine is smooth, even when pushed hard, but they do start making a little noise when it gets up to speed. All the similar models go through this road noise at higher speed levels.

The main feature of the mild-hybrid system is the 48v starter-generator that has been integrated. It employs to restart the engine after using the brakes.

The driving position is relatively easy to find in the Suzuki Vitara. Both driver's seat and the steering wheel can be adjusted up and down as well as forward and backward. It has got comfortable seating. The level of the gear is higher and reasonably big, so that it's easy to handle.

The entry-level SZ4 trim provides you with a DAB radio, USB port, and Bluetooth connection. The media of this model is fundamental, but it is also reasonably easy to use. Only in this model will you be provided with a CD player. Meanwhile, you get a more high-tech touchscreen infotainment system along with an integrated sat-nav, in the SZ-T and SZ5 trim levels.

The Smartphone link technology mirrors a simplified version of your android or iOS device on the screen. It is quite easy to use, but it can have a little slow response time.

The door and lids feel light when you close them. Most of the interiors are made out of plastic, including most of the dashboard, which gives it a cheap touch. When it comes to the overall quality of the interior, Suzuki could have done much better than this.

The Euro NCAP has awarded the Vitara 5 stars when it comes to safety and protection. It has got an automatic emergency braking, a very essential safety feature that comes with all the different models. There is also a lane departure warning that is present in the vehicle, along with lane-keeping assistance, blind-spot monitoring, and rear cross-traffic alerts. Thatcham Research, security experts, gave Vitara a four-star for the car's resistance to theft, but it got only a three-star for the resistance of getting broken into. These scores are average at most for a small SUV.

Taking the interior under consideration, the car Vitara does not really cost a lot. It starts below $17,000, which is very less for a small SUV—the more money you spend on, the higher models, the better the features. Of course, it has been that way for all cars.

The Suzuki Vitara is one of the most spacious small SUVs on the market and also one of the most worth it cars. The entry-level edition gets many features, and the engine technology helps in keeping the running cost low. The rival companies may have something better for a little higher price range.

When we talk about the exterior of the Suzuki Vitara, the design is the very first aspect that comes to our mind. The Grand Vitara features a sleek, dynamic, and stylish design. With the branding of the manufacturing company in the middle of the grille, the brand-showcasing has been done correctly. The headlights of the vehicle have a winged design, which adds to the dynamicity. The front chin of the car is remarkably stylish, and it successfully amps up the look of the car.

Designing such as lines and stripes are missing on the sides of the vehicle. The taillights also sport an elegant design. The car stands tall at the height of 1610mm. The width of the Grand Vitara is around 1775mm, which, as a result, facilitates in amole interior space. The car also has remarkable ground clearance, which makes the car run swiftly, even on rough roads. The wheelbase is around 2500mm, and the trunk capacity of the vehicle is about 375 liters, which for the record, is quite spacious. Overall in terms of exteriors, the car does not fail to impress the audience with its subtle and praise-worthy features. 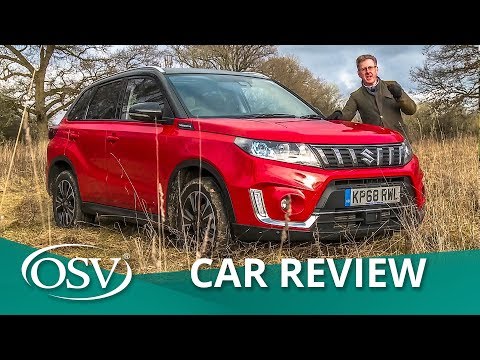