Japanese automaker Suzuki has been in the business in the Philippines for decades. When one mentions the brand, most of its entries that come to mind are the sporty hatch Swift, the ultra-cool, 4x4 Jimny, or the more flexible Vitara. Others might also summon thoughts of experiencing the uber functional Super Carry and the multi-purpose 7-seater Ertiga. But when one is to nudge the conversation with its latest subcompact, the first contender that pops up without any introduction is the well-intentioned Suzuki Celerio.

Situated between the Alto 800 and the Swift, the Suzuki Celerio was first introduced into the global scene in late 2008 in India. Touted at that time as the A-Star and the more premium alternative to the entry-level kei-car-derived Suzuki Alto. Its first-generation entry reached the Philippine shores' dealerships a year after. Compared to its less inexpensive sibling, Celerio was notably larger, safer, and sported a set of more modern features and European-inspired overall design language, which was vastly reminiscent of the French mini cars during that decade.

In 2014, the second-generation of the Suzuki Celerio debuted in the Indian market as well, right before it was officially announced in the country in August 2015. In this time, Suzuki took a gamble and introduced the its entry into a more different direction. Considerably larger and taller than the previous iterations, its styling is now more mature and focuses on passengers' comfort and convenience more than anything.

The All-New Celerio is Suzuki's entry into the subcompact car market in the Philippines. The Suzuki Celerio features a sharp front-end design with distinct character lines on the side that improve aerodynamics and create a stylish silhouette. The Suzuki Celerio is placed over the Suzuki Alto mini-hatchback and which also serves as the perfect car for new car buyers. Suzuki is quite known to be an expert in making small cars. From creating the famous Suzuki Alto now comes the Suzuki Celerio with more advanced and modern look.

For a small car, the Suzuki Celerio comes with modern and big standards – features alone that make this subcompact entry a standout.

Perhaps the most obvious change it offers can be seen on its dynamic styling, one that rises far beyond even for small cars. The new Suzuki Celerio is now adorned with a sharp front mask with encompassing character lines, flowing into its rear profile. As it is, its aerodynamic is more than improved as well as its style.

Its interiors have also been largely improved over that of the Alto. First things first, it now is equipped with a more breathable cabin – one that is literally head and shoulders above the competition. With more-than-sufficient room for legs, passengers are now able to stretch out and relax in a relatively stress-free riding condition. Also highly added is its more intelligent design language inside, which makes it as fluid as it is comfortable.

Its luggage space is also now larger than ever. Courtesy of Celerio's low-to-the-ground tailgate which opens wider, offering convenience on easy loading and unloading for virtually all types of passengers. The best in class relative to its luggage capacity back in 2014, Celerio's luggage space remains as its most generous offering in terms of its interior, thanks to its split folding rear site. The new Suzuki Celerio also now boasts of a plethora of performance-enhancing features. The list includes a new K10C Dualjet engine, a K10B engine, a contemporary auto gear shift and 5-speed manual transmission. The refresh can also handle even the tightest of cities around locally, all thanks to newly-developed suspensions, plus its 14-inch alloy wheels.

Everyone's safety is more assured than ever with the new Suzuki Celerio. Whether you are placed in the driver's seat or just tagging along for the ride, you all are in good hands with the new entrant. Scores of top-grade and industry-leading, active safety features are hard at work at ensuring your drive goes the way it should – naturally safe and sound.

The Suzuki Celerio is offered with the choice of a 3-cylinder K10B 1.0-liter petrol engine. This kind of engine is good for 68PS of power and 90Nm. You can either choose this engine with a 5-speed manual or a CVT.

When it comes with efficiency, it claimed number is 19kmpl. If you try to fire up the motor, you will be greeted with the 3-cylinder thrum, but once you press the accelerator, the vibrations smoothen out. The Suzuki Celerio is not a performance car but since it has the 845kg mass it has to move around, and the power seems adequate. A 0-100kmph time of around 13 seconds is not lackluster for this segment. It is, in fact, one of the best. The Suzuki Celerio also features the brand's Total Effective Control Technology (TECT) architecture which is noted for its usage of high-tesile steel to beef up its body's rigidity and to also keep its weight down a notch. The new Celerio is also equipped with an independent MacPherson strut suspension right up front and a semi-independent torsion beam suspension located at its rear.

The current generation of the Suzuki Celerio also comes with a standard rack and pinion steering with electric power assist. In the same vein, Suzuki has elected to arm it with ventilated front disc brakes with drum rear brakes to boot. The performance of the vehicle is enhanced by the smooth shifting manual gearbox while the automatic is a bit laggy in response. Its fuel efficiency achieved was closer to 13kmpl. The top speed is around 145 kmph.

The Suzuki Celerio also comes with a simple design. It may look like a bigger compared to the bare basics Suzuki Alto. It has the grille which is a three-piece unit that connects the headlights. It has circular fog lamps, a contemporary rear end unit, and 14-inch alloy wheels which ultimately add to the car's semi-sporty silhouette. Moving onto its side, the Suzuki Celerio boasts of a crisp character line, a much straighter beltline, and larger side windows. Its rear comes with vertical taillights and a much bigger rear hatch opening that extends lower into the rear bumper. Meanwhile, there is also an integrated and high-mounted rear spoiler. Driving the Suzuki Celerio, you can feel the bumps in the cabin at low speed since it is set up on the stiffer side. It seems that Suzuki Celerio seems to take things in its stride. It does not have any uneasiness that is associated with smaller cars, especially at high speeds. Talking about the stability of the vehicle, it is great too. It is a little heavy when at low speeds but provides adequate feedback. It has the Bridgestone tires that are squeaky and have ample grip. It has the NVH too that is decently controlled but at higher speeds, the engine, as well as wind noise, are audible in the cabin.

Overall, the Suzuki Celerio measures 3,600 mm x 1,600 mm x 1,540 mm (L x W x H) and is equipped with a wheelbase of 2,425 mm. When one encloses this minute hatch with its other compatriots, it's almost always certain that the Celerio is one of the most pocket-sized entries in its class. Despite its size, however, one is also bound to be dazzled once a user steps inside.

The Suzuki Celerio has a more modern-looking cabin compared to the Suzuki Alto which has a more 90's look. It has plastic fittings in a light grey color. It has a touchscreen infotainment system and several cup holders inside. When it comes with the steering wheel, it lacks some buttons, so you need to check the dashboard for any other buttons, not in its steering wheel. It has a wheelbase of 2,425mm makes sure that there is space for five. However, since it has some of the tapering contours at the back, the Suzuki Celerio can only comfortably seat four.

Meanwhile, a bespoke 7-inch touchscreen infotainment system is exclusively set up for the Suzuki Celerio. The new unit also now supports Bluetooth connectivity and navigation, apart from CD, AM/FM, Aux, and USB. Perhaps the only drawback in this very section can be found with its front cup holders that are visibly placed a bit too low for most.

For its boot space capacity, it has 254-liters in maximum, since it's a compact car you really can't expect more space inside. It has meter dials that are very simple and feature a digital readout of the fuel, efficiency, and trip completed. The interiors in the new Suzuki Celerio seems well put together. It has a decent material used for its interiors and exteriors. The plastic is a tad hard towards the lower part of the dashboard but is passable given the segment the Suzuki Celerio operates in. It comes with a manual AC unit and the aforementioned touchscreen system which is very decent to operate. There is really nothing fancy when it comes with its system, but it can function well and also gives a decent good quality. It also has an electric release for the fuel flap and for the boot, however, there is no provision for a day and night mirror. It has a wing mirrors that can be controlled through electrical adjustment in the cabin. 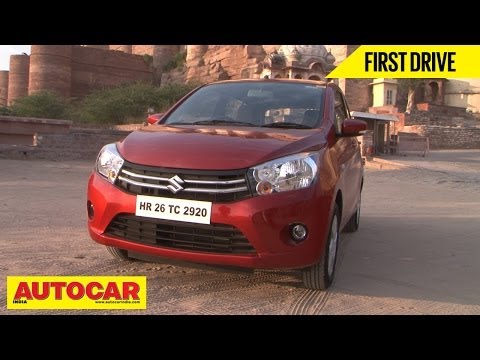 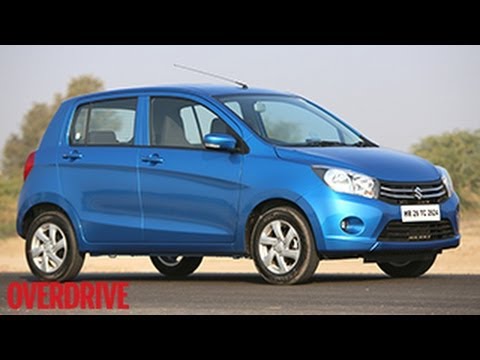