Ultra-Cheap Nokia 2.3 Is Now Official in the Philippines, Priced at PHP 5,990

In the price-sensitive Philippine mobile market, HMD Global's newest stab in the budget-friendly segment should fare quite well.

HMD Global's newest budget-friendly entry, the Nokia 2.3, is now official in the Philippines. And for its first act in 2020 in the local mobile market, the Finnish company has also announced the phone's accompanying price.

Retailing at only PHP 5,990, the Nokia 2.3 is HMD Global's most competitive release yet in the entry-level section. For interested buyers, you can now avail the phone at all Nokia stores and authorized dealers nationwide. Alternatively, the device can also be bought online, from platforms such as Lazada, Shopee, MX Online, and Argomall. Each successful purchase will come with a free Bluetooth speaker and a case.

Easily the most headlining feature of the Nokia 2.3 is its AI dual rear cameras. The device sports a 13MP primary camera with a 2MP lens, used for depth-sensing.

The Nokia 2.3's dual-camera setup also features Recommended Shot, a software add-on that automatically takes alternate photos before and after a user presses the shutter key. A set of recommended shots, or the best ones in the bunch, is then provided.

The Nokia 2.3 also boasts a 6.2-inch IPS LCD notched display, with a resolution of 720 x 1520 pixels. Despite its panel, the phone manages to feature an Always On display. The handset's notch houses a 5MP front-facing camera.

Under the hood, the Nokia 2.3 banks on the power of MediaTek's Helio A22, based on a 12nm architecture. The phone is then powered by PowerVR GE8320 for its GPU needs. A standalone 2GB of RAM and 32GB of internal storage also fuel the device. The latter can be expanded via the phone's microSD slot.

Another highlight of the Nokia 2.3 can be found in its battery offerings. With the device's 4,000mAh battery capacity, it is claimed that the phone can last up to two days. 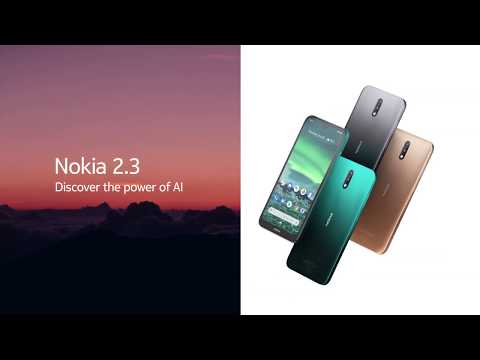 Step up to more with the new Nokia 2.3

The Nokia 2.3 also comes with a dedicated FM radio, right without a data connection. There's also the addition of a 3.5mm headphone jack, which is almost a rarity in the upper mid-range to flagship smartphones.

The Nokia 2.3, it being part of HMD Global's Android One portfolio, runs on Android 9.0 Pie. The phone is also among the Nokia phones that are planned to be upgraded to the latest Android 10.0. The device retails in two color variants – Cyan Green and Charcoal.

Lowest Price in the Philippines P5,990