The Nissan Navara – The Pickup That Ticks All The Right Boxes

Nissan continues to serve the most successful pickup truck in its current generation. It has moved up a few notches in terms of premium appeal as well as functionality. Nissan Navara, currently in its third-generation model, for the Philippines and the legacy of reliability and innovation powers on. The Nissan Navara has lots of upgrades, apart from the visual improvement, it will set the bar higher for the pickup segment in the Philippines.

Nissan Navara's current-generation has made its debut in 2014 right before finally hitting the local shores in early 2015. A year later, the Japanese automaker was noted to have added a new edition to the series dubbed as the Navara Sport Edition. An updated Navara is now slated to be announced by Nissan any time soon.

Dubbed as the pickup's next generation, the Nissan Navara's key features are next to endless. Nissan's efforts to innovate in this series are also notably endless – culminating to a legacy of reliability among its 14 million pickup owners around the world. And in the Philippines, this adventure continues to power on with the Navara. The Nissan Navara's foremost hallmark lies on its beastly power. Whether you're gunning for power or fuel efficiency, you are very much guaranteed to get both of these with ease and confidence, and in the long run, a well-deserved bragging right. The new generation's engine boasts of a maximum output of 190ps and maximum torque of 450 Nm. And when it comes to fuel efficiency, you are still bound to experience the brand's indefatigable ambition to ensure that every drop of fuel counts, may you be in a race or simply in haste.

The Nissan Navara is also renowned for its low-friction components that readily aid the engine on using less energy as much as possible. Its improved aerodynamics is also worth mentioning for as it significantly reduces wind drag on the vehicle.

More with its record-breaking performance features, the Nissan Navara is also commended for its inclusion of a full-length, fully-boxed ladder as opposed to the typical 3-sided, open C-shape rails that are found on some other trucks. This significant add on beefs up torsional stiffness and reliably delivers a legitimate performance both on and off the road.

In the Philippine market, the new Nissan Navara is also celebrated for its Rigid 5-link rear suspension which is claimed to improve comfort, dynamic performance, rear traction, and stability. All of these are more pronounced without any loss of capacity- or cargo-carrying capability. Its wading capability is likewise propelled on the spotlight, with an advertised fording depth of 450 mm. Nissan has also tested the vehicle to 800 mm as well without any reported kinks or issues. In a nutshell, the Navara should remain completely dry when it is submerged in water. And best of all, it still should emerge with vigor and power.

Being a modern lifestyle-inspired entrant, the Navara also benefits from a slew of electronic driving aids which are most commonly found in the upmarket demographic of premium sport utility vehicles. Some of these include the Hill Descent Control, the Vehicle Dynamic Stability Control, and the Traction Control.

The Nissan Navara is offered in only one engine option in the Philippines. The 2.5-litre four-cylinder diesel engine which though is tuned in different ways for both 4x4 and 4x2 versions. For the 4x4 variants, the engine can pump out a maximum power output of 188 bhp and a peak torque output of humongous 450 Nm. On the other hand, the 4x2 variants produce maximum power and torque figures of slightly lesser 162 bhp and 403 Nm respectively.

In terms of ride and handling, much has already been said about the Navara's new coil-spring rear suspension offering. As it is, its ride comfort takes it up a notch despite of it having an absence of disguise that its springs are still attached to a live axle. Meanwhile, the vehicle's matched dampers and bushings efficiently absorb the occasional wheel judder and any erratic body motion which at time reach the cabin gets nullified by its Zero-G seats.

The Nissan Navara also employs more body roll than before even in its newest iteration. Nevertheless, it is noted that its rear axle does no longer skip or even hop through some of its bumpiest turns.

Perhaps the most glaring drawback Nissan Navara users have voiced out is its parking skills. Its light steering appears to be heavy enough and long-geared at low speeds, while its turning circle is also notably gigantic. In the same vein, the vehicle's curvy hood also makes judging the front a bit on the challenging side. The only redemption in this area is its rear-view camera. With all things considered, users are very much encouraged to back up the vehicle in every parking space.

The All-New Nissan Navara provides premium cabin feels. The only quality that rivals this very feature is how tremendous its cabin is. Conveniently mirroring the large appeal of the exterior, the interior cabin feels large and wide, with the cabin finished in an all-black theme and an elongated center console to make you feel comfortable.

It has a three-spoke steering wheel that is slightly different from what you have seen on other cars from Nissan. It has a brushed aluminum insert which is placed for the buttons for audio and Bluetooth along with cruise controls as well. It has the colored MID screen positioned in the middle of the instrument console, which feels nice and intuitive. It has a wider center console though misses out on a touchscreen which is gradually becoming a norm even on other pickup trucks.

The 5-inch screen for the music system has supports for CD, radio, USB, Aux-in, iPod and Bluetooth connectivity, with a nice layout of buttons around it making it feel subtle and old school. The controls for the manual AC provides optimum cooling ability along with the rear AC vents. Unfortunately, it doesn't come with an automatic climate control which could have been appreciated. It has the faux aluminum touches on both the sides of the center console which is a nice element too. The Nissan Navara provided a leather upholstery, power adjustable driver's seat, push-button start with keyless entry.

The Navara also comes equipped with extra feature that make it distinctive among its contenders in its class. It boasts of a steering audio, phone controls, multiple full-color digital infotainment displays, and a parking camera. User also get electronic stability control and electronic limited slip functionality to aid drivers off the road.

The Nissan Navara's tough-looking, design language on its exterior expertly amalgams the traditional elements like its prominent grille and its boxy silhouette with the brand's unmistakable style signatures in most of its modern entries' hallmarks like the muscular front shoulder line, the sculpted flanks, and that smoother greenhouse. Consequently, users get to experience a truck that easily stands out in the crowd, especially when they get to opt for that variant with the orange paint job. The Navara's front aesthetics is very much reminiscent of the other popular entries under the Nissan SUV lineup which includes the mighty Patrol due to its three-partitioned "V-motion" chrome grille, which with the boxy-looking headlamps, creates a front face that is both huge and domineering.

Meanwhile, its headlights come integrated with the LED projector headlamps alongside the daytime-running LEDs in order to produce some aura of sophistication right on its frontal view. The vehicle's fog lamps, on the other hand, come with chrome surrounds which ultimately add some premium touch as well. The only element the Navara misses out on to complete the circle of this intended appearance are faux aluminum skid plates on its front bumper.

On to the sides, got the traditional pickup truck appeal, with no characteristic lines or creases on the side doors. It tries to maintain its gigantic appeal on the sides as well, thanks to the large 18-inch alloy wheels. The chrome garnish on the rearview mirrors are also nicely styled rather than being squared, door handles, and window waistline make the look much more premium than what it is, while for its roof rails at the top add in some functionality and sporty appeal to the car.

At the rear, got a huge loading bay, which ends up in a smoothly designed rear tailgate. Unlike other trucks' rear end, the tailgate of the Nissan Navara comes with a distinct looking V-shaped cavity, above which are placed the Nissan logo and door handle, along with a uniquely styled spoiler.

The rear bumper has a thick faux aluminum garnish, while the large and vertical tail lamps have a subtle design to it. The Nissan Navara is not meant to provide a super plush ride quality, but a rigid and rock-solid stability in all driving conditions. With a suspension setup of independent dual wishbone with coil spring and stabilizer bar at the front and a multi-link with stabilizer bar at the rear, the Nissan Navara feels a bit stiff but still stable on each driving condition. Beyond these detailed features, the Navara's big, 18-inch wheels and its funky integrated spoiler ultimately make this contender as one if not the sportiest-looking truck that is around at the moment. 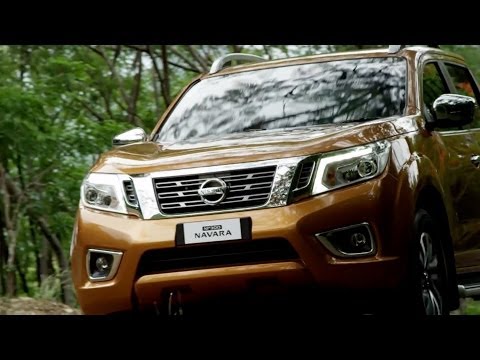 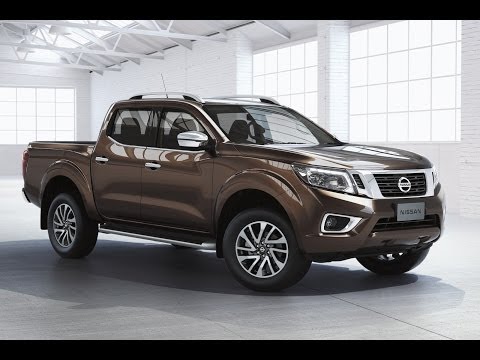