When one is in the market for a day-to-day car, subcompact sedans are almost always at the top of his or her lists. Apart from them being fuel-efficient, these cars are also easy to navigate, all thanks to its moderate size which still provides ample space right in the inside.

In the Philippine market, specifically in this segment, the Nissan Almera shines bright for a slew of reasons. While not as popular as its compatriots, the Almera still expertly carries itself as one of the favorites in the local market. Just right below, we'll find why this sedan is one of the Pinoy's go-to choices.

The Nissan Almera is a four-door sedan conveniently positioned as a family car in the Philippines. Without overstating its obvious features, this sedan is famed for its sleek curves and nuanced lines enveloping its body, culminating to a subtle touch of class. This familiar sophistication also stretches to its chrome accents found in front and at its trunk.

Inside the Nissan Almera, you'll be ushered into a 5-seater cabin which also boasts of a generous head- and leg-room. The sedan also comes with a center cluster of controls which inadvertently provides an illumination for easier readability during the night; a rear air-conditioning vent equipped with independent control is also available for the top-tier variant. Despite of its size, there is no compromise in its trunk space which still manages a large 490L capacity, currently the best in its class.

The Nissan Philippines has also equipped the Almera with top-of-the-line features such as front airbags, brake assist, keyless system, immobilizer, speed sensing door locks, and child protection lock plus anchor, among others.

The premium Almera packs a 1.5-liter 4-cylinder gasoline engine that is paired with a 4-speed automatic gearbox. In theory, this engine is capable of revving up 134 Nm of torque and 99 HP. In reality, however, these offerings have a different story to tell.

As it goes, the Nissan Almera's performance is praised whether it is subjected in a fast-paced trip or a relaxing ride experience. Notably, its 1.5-liter engine is responsive while the rev performs adjacently with every input on the accelerator pedal. Even if you place four passengers aboard, its powertrain can pull the vehicle with ease and without a fuss.

Being touted as a city car, the Almera trudges along tight cities like it's just a child's play. In this very section, we all have its lightweight steering to thank for. In addition, Nissan has also equipped this sedan with a soft suspension system which is deemed to be efficient at dealing with road imperfections. For the most part, the car's ride comfort is inarguably one of its best features.

In terms of fuel economy, the Nissan Almera sips fuel at around 7.1km/L right at an average speed of 15kmph. While at a higher speed of 60kmph, the sedan performs at an impressive 15.2 km/L. And when it's on the highway, this refresh easily averages 21.3 km/L of fuel at 90kmph.

The latest generation Nissan Almera's facade borrows a couple of pages from that of its bigger sibling variant – the Nissan Sylphy. For instance, it is made prominent by the same hourglass grille and swept-back boomerang headlamps. Nissan made it altogether distinctive for the Almera as it equipped it with curvier and much sharper offerings than the Sylphy. Also complementing its overall exterior styling are the accompanying chrome accents placed at fog lamps, door handles, and the grille.

The Nissan Almera's sides, on the other hand, exudes a tall bearing and is made more elevated by its character lines. Its rear end, in the meantime, sports a small lip spoiler, adding to its overall sport aspirations.

At large, the Nissan Almera's exterior isn't as lustrous as the other subcompact sedans in the market nowadays such as the Mazda 2 and the Toyota Vios. Nevertheless, the Almera is still decidedly not monotonous.

The Nissan Almera measures a boastful height of 1,505 mm and a long wheel base settling at 2,600mm. This places the Almera conveniently at the median part in its class – a vantage point if you may ask, especially if you're looking for a car that is easy to drive and features more interior space all at the same time.

A light interior theme works in every corner of the Nissan Almera. Without getting to the more obvious, this subcompact sedan is specifically engineered for consumers who seek a well-lit room and a minimalist look. But if you're such a stickler for dirt and stains, this one isn't just for you.

The Nissan Almera's dash is decidedly clutter-free and should work quite well with the straightforward. Its black central panel which is armed with a circular button cluster for automatic climate control perhaps is the only feature that deviates from its fluid them. There are also plastic parts in between that may prove to be an eyesore for some. Overall though, its leather offerings in its seats should veer you away from these interior missteps.

The Nissan Almera's controls are likewise placed in reachable locations, all of them anyway, except for the power-folding side mirrors' electronic adjuster. This awkwardly forces the driver to lean forward just to adjust the mirrors.

Thankfully, Nissan has equipped the Almera's driver seat with height adjuster which comes in handy when one is looking the right driving position. In the same vein, a tilt steering wheel is another component in its interior that should provide the driver a much-needed comfort in this section.

For its entertainment source, Nissan has opted to equip the Almera with a standard dah-integrated 2-DIN head unit which can be connected readily with the modern gadgetries through a USB port.

In terms of space, the Nissan Almera simply doesn't disappoint. All its leg-, head-, and elbow-room are abundantly provided with space. 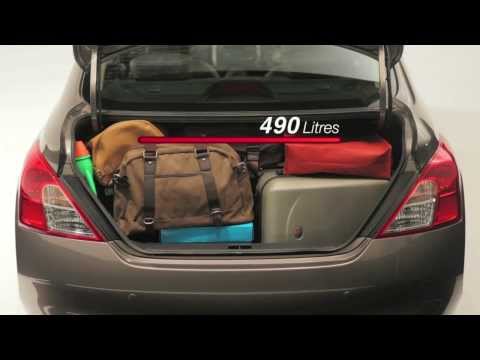 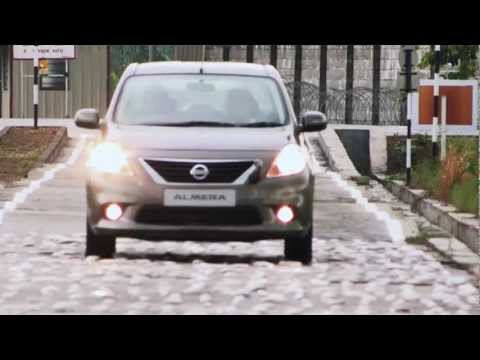