Should you consider the Mitsubishi Strada for your pickup needs?

The Mitsubishi Strada 2019 unwrapped: Is it worth the wait?

The Mitsubishi Strada has come a long way after its introduction to the global market in 1978. Originally manufactured in Japan, production of the ever-reliable pickup van was moved to Thailand in 1995 when the third-generation Strada was released. In the Philippines, Mitsubishi Motors Philippines Corporation (MMPC) has been earning more than its fair share of the sales from this particular brand model since its second-generation iteration was introduced in the 1990s. With its tough-looking features and distinctive style, not to mention good performance, it is not surprising that the Strada has become a popular choice among pickup van owners.

Five years after the fourth generation of the vehicle was launched, many are anticipating the arrival of the next-gen Mitsubishi Strada and the new, exciting upgrades it has to offer. The Mitsubishi Strada 2019 was introduced in Bangkok, Thailand late last year, and is about to reach the Philippine market soon. Although there are mixed reactions to the enhancements of this latest model, the market perception is predominantly positive.

Mitsubishi put in a lot of effort to refresh the 2019 Strada. It carries trendy features that suit the varying personal and commercial needs of modern drivers and pickup van enthusiasts who depend on their vehicles as their regular workhorse.

The revamped exterior sports the new Rock Solid design theme that is also seen in the Mitsubishi Xpander. Even though no remarkable changes were made to the old Strada model's overall shape and architecture, the brand's famous Dynamic Shield design is evident even at first glance, with its X-shaped grille and J-curve pattern that connects the bed and the cab. There is also the two-tier pair of headlights and foglamps, with the LED daytime running lights and slimmer headlights sitting together on the upper tier, and the bigger foglamps with C-shaped chrome accents and turn signal on the lower part. These enhancements to the front exterior give the Strada a tougher, more athletic appeal.

Ultra-fine changes are also visible in the rear of the pickup van. The taillights have been upgraded to resemble those of the latest generation of the Montero Sport. New alloy wheels, with 16 inches and 17 inches variants, and tailgate trims add to the fifth-generation Strada's generally sporty yet stylistic vibe.

The interior was given a facelift, with a new dashboard and new interior panels that give a more premium look and feel. It is noticeable that the front interior layout is almost similar to that of the Montero Sport. Although some soft-touch materials are used to improve overall cabin feel, most of the panels are made of hard plastic. The steering wheel has a telescopic adjuster aimed at making driving more convenient and comfortable even for drivers with shorter arm length or height. The higher-end variants got extra upgrades such as leather-wrapped steering wheels and more sporty-looking gauge clusters. The upholstery is just right for comfort.

Under the hood, the 4N15 2.4-liter MIVEC turbodiesel engine of the fourth-generation Strada was retained. A 2.5-litre engine variant in two states of trims, based on their transmission, is also being offered. There are also some interesting refinements to the chassis and the suspension aimed for a smoother ride. The brakes discs and front caliper pistons were also made larger, same with the rear dampers which have been improved to contain more oil. These enhancements are most likely made to improve ride quality and maneuvering.

The five-speed manual gearbox units make 136 horsepower at 4,000 revolutions per minute (rpm) while making 324 Nm of torque at 2,000 rpm. Both the 4x2 and the 4x2 rear-wheel-drive are available, but the automatic transmission trims are more powerful and can churn out 178 horsepower and 400 Nm of torque. Unfortunately, though, an all-wheel drive (AWD) mechanism was not provided as an option in the automatic trims even if there is so much high power.

The high-end variants have interesting technological refinements including smart diver aids and safety systems that enable the driver to get lane-change assistance, mitigate forward-collision, and monitor blind spots. Other enhancements include an ultrasonic mis-acceleration mitigation system, a reverse camera with rear cross-traffic alert, and a multi-view monitor that provides the driver with a bird's eye view.

With the previous generations of the Strada known for being one the safest pickup trucks, the all-new refined model has the same Mitsubishi-exclusive Reinforced Impact Safety Evolution (RISE) body. This design incorporates front and rear crumple zones with reinforced beams to absorb collision force and direct it away from the vehicle's interior.

On top of the RISE body, the Strada also comes outfitted with dual-stage front SRS airbags as well as seat belt pre-tensioners that reduces the risk of passengers being slammed against the dashboard or steering wheel in the event of a frontal collision.

The 2.4-litre motor, which is found in higher trims, can generate up to 181 horsepower and a peak torque of 430 Nm. Plus, in this engine trim, the variants get both rear-wheel drive (RWD) and AWD available for the automatic transmission option.

In the fuel efficiency department, the Strada's performance is rather mediocre. A 2017 Department of Energy (DOE) Fuel Economy run measured the Strada's (automatic transmission) fuel consumption as 18.9 kilometers per liter (km/l) – higher than what was recorded for the Ford Ranger and Nissan Navarra but lower than those of the Suzuki Super Carry Pickup's and Mahindra Supro Pickup's (Manual). 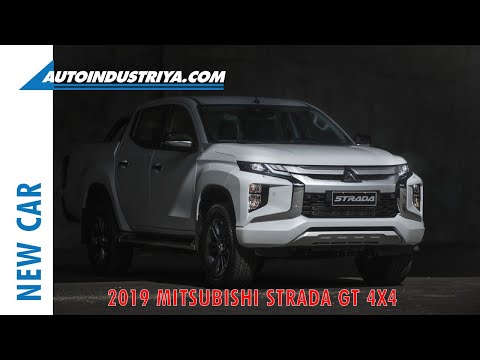