Replacing the old Viano MPV is no easy feat. But the Mercedes-Benz V-Class, under the brand's tutelage, has gone on to disprove such a challenge.

A definitive people-carrier right off the Mercedes' indelible bloodline, the Mercedes-Benz V-Class offers a generous amount of space, all mixed with bespoke saloon car luxury. It comes with two different body styles – a long wheelbase and an extra-long wheelbase. The latter is upgradeable to eight seats while the former comes with seven seats only. Right on top of that, there are also two trim levels – Sport and SE. Also, there are two engines to choose from, which include the 220 Bluetec and the 250 Bluetec turbodiesels.

Mercedes also made headlines when it dropped the V6 engine from the Viano in favor of the V-Class. It is suggested, however, that one must go for the V250 if you want a more economical, faster option than its predecessor.

The Mercedes-Benz V-Class also offers a slew of standard equipment, even on its entry-level SE. These include Bluetooth, sat-nav, parking sensors with a reversing camera, heated seats, and crosswind assist.

Its pricing is also made more competitive and accessible, which is already a feat in itself, as the V-Class receives all the usual bells and whistles on comfort and luxury. Lots of safety and technology packages are also thrown into the mix.

The Mercedes-Benz V-Class' current main rival is the Volkswagen Caravelle.

The Mercedes-Benz V-Class is fueled by a 2.1-liter diesel engine, which produces 187 bhp, and it is notably just as fast as the old 3.0-liter unit, which powered the Viano. As such, its fuel economy is increased while its performance isn't sacrificed. Also bolstering this department is the vehicle's brisk 0-62mph sprint time of just 9.1 seconds with an available 480Nm for overtaking.

With the Agility Select system in charge, users can choose from an array of driving modes – Eco, Manual, Sport, and Comfort. These modes modify the throttle response and steering to tailor-fit your preference. If you want the safest and the most matching among the three, the Comfort mode is the way to go.

The Mercedes-Benz V-Class' gearbox, however, is noted to be lethargic and tends to hang onto gears for a noted period, alongside some episodes of jerky upshifts. The Eco mode, on the other hand, dulls its throttle response while the Sport mode is noted for its quick change into lower gears, which in effect, isn't aiding its economy.

Ultimately, the overall riding experience in the Mercedes-Benz V-Class is comfortable for the most part. This is all thanks to its adaptive dampers, which adjust to the road you are trudging on. Meanwhile, its steering is both light and easy to use. It also feels solid at high speed, but there is a hint of more brittleness in its chassis when one chooses to go faster.

The V-Class' front suspension also does a great job of filtering out bumps in the process, but with the van's underpinnings at the also indicate that you would have to experience thumps over expansion joints right on the motorway.

The Mercedes-Benz V-Class' V250 Bluetec generates emission of 166f/km of CO2 and fuel economy of 44.8mpg – numbers which are much better than VW Caravelle's 37.2mpg and 199g/km. The numbers are also a significant increase over the old Viano's 3.0-liter V6 CDI model, which at the time of its launch, was also a class-leader relative to its running costs.

Like the VW Caravelle, the Mercedes-Benz V-Class also manages to exude a transformation from a van into a quintessential business-class transport more legitimately than the inexpensive Ford Tourneo. In it, you can find standard Nappa leather seat trimming, alongside some splash of chrome and faux leather right across its dashboard. And with its switchgear borrowed from the brand's most renowned passenger cars, you can only expect its buttons to be that substantial as well.

Unlike some of its rivals in its class, the V-Class has done it well in presenting its dashboard. Everything on it is arranged logically, making it easy to use. The same can't be said with its often confounding infotainment system.

The V-Class's driver's seat is notably set quite high, so an excellent view of the road is promised. High visibility is likewise in the mix as the car features deep side windows and large door mirrors. However, its view behind isn't that clear with its third-row seats hindering your vision through its rear screen. These shouldn't be an issue though, as all its models come with parking sensors, both on its front and rear. Sealing the deal, a reversing camera is also included.

Your access to the front seats is made easy, all because of its large door apertures. Its rear seats are even more accessible, mainly due to its sizeable electric sliding door situated on each side. There is also a completely flat floor for everyone, so passengers should be able to move around inside quickly. If that doesn't help, the V-Class also comes with a roomy interior.

The V-Class is available in two different lengths with three seat layouts. It comes with seven as its standard offering, with eight seats right in its extra-long versions.

The Mercedes-Benz' V-Class probably has the most expressive exterior out there. This is exemplified by its beefy façade, all accompanied by its tapered hood and modern LED headlights, which also feature adaptive hi-beam assist and LED indicators and daytime running lights.

The V-Class also boasts of front and rear sides, which are connected by rising lines, which easily give off a robust yet aesthetically-pleasing design language. Its standard exterior features comprise of 18-inch twin-spoke allow wheels, rain-sensing wipers, backup camera, anodized roof rails, and heated mirrors with folding function. 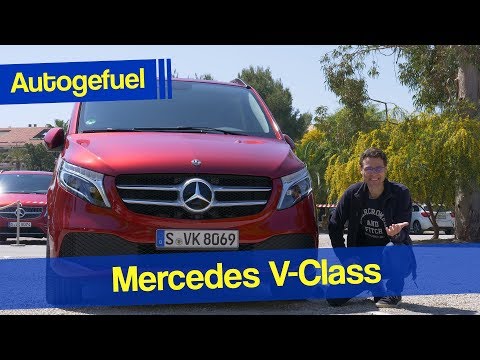 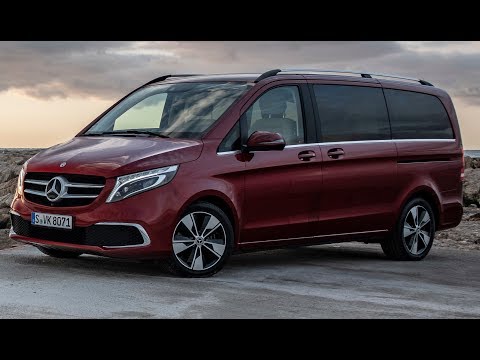