One of the highest-selling models for Mazda in the Philippines is the Mazda 2 sedan. The entrant's popularity in the compact sedan segment is all attributed to its premium appeal right besides its entry-level compatriots.

Just recently, the Japanese carmaker introduced a new mid-spec'd variant of the Mazda 2 sedan. The new variant was assembled in Thailand and only cost less than the trims that are already on offer. Meanwhile, there were no noted modification done under its hood. The reason behind the price hike is the inclusion of a new kit which now includes 15-inch alloys wrapped with 185/65 tyres, matte black fog lam housing, and the matte black finish which ultimately replaces all the body-colored items.

The newest refresh has also ditched the LED headlamps with DRL, besides the part-leather and part-suede upholstery. Nevertheless, its features in the safety section have remained largely retained.

The Mazda 2 borrows its engine and gearbox combination from its hatchback platform. Consequently, that entails that the sedan still comes with a 1.5-liter petrol engine which is capable of producing 108 BHP of power and 139 Nm of torque. In addition, the engine is coupled with a 6-speed automatic transmission which gets its assistance from paddle shifters. All thanks to the brand's in-house i-stop idling technology, this refresh gives an impressive fuel economy of 22.82 kmpl.

With its unique engine offerings, the Mazda 2 naturally brings plus points in its performance to the table. The entry-level 74HP engine can carry you more-than-decently around town but is noted to be struggling on the motorway. For that, one is encouraged to hunt for the 89HP version which is touted as the pick of the range, all made possible by the amalgamation of low running costs and an already-impressive oomph.

Ultimately, the Mazda 2's 113HP edition is on another level, thanks to its nippy performance and excellent engine note. But as you'd usually expect from this tier, its price is also expectedly hiked up. Probably the most important feature of the Mazda 2 in this segment is the manner it drives. For one, its determined steering allows users to dart in and out of the metro traffic with such ease and fluidity; also, its manual gearbox is such a pleasure to use.

The Mazda 2 isn't a perfect sedan in this respect as you'd already gleaned. Some of its noted drawbacks include its slightly bumpy ride on poor surfaces and lots of road noise while at speed. But if you are a keen driver, such missteps are forgivable. Another disadvantage is its all-round visibility. The problematic areas can be seen around where the windshield meets the side windows, and the location where rear window meets the rear side windows.

Akin to its exterior, the Mazda 2's interior throws a vibe that is positively between sportiness and sophistication that is blended just well for the Mazda enthusiasts. Despite of its dashboard and cabin's simple design, the brand manages to equip them with practically all that you could ask for in a sedan.

Perhaps the most premium section in the cabin can be found in the driver's cockpit which is front-lined by the presence of a three-spoke round-themed steering wheel, all complete with silver accents, plus the subtle steering mounted buttons. Meanwhile, the interior's instrument console beautifully reflects the modern layout of its front fascia. In addition, a digital panel for readouts of essential information is also among its inclusions.

The Mazda 2's familiar round theme is also present in its AC vents, which draws an evident line in between. Moreover, this line separates the dashboard in two different partitions which also get a pop-up style touchscreen infotainment system which is conveniently positioned right at the upper portion; a set of three round dials for climate control are also thrown into the mix.

The only drawback that can be found in its interior stylings lies on the consistency of materials the brand has opted to use. Quite noticeably, the used plastics around the middle of the dashboard are soft and squidgy while the ones around the top of the doors, center console, and steering wheel are on the hard side and quite a bit scratchy.

The Mazda 2 comes with a bespoke 7-inch infotainment system. The Mazda's accompanying system, unlike the Ford Fiesta's is controlled through a rotary dial – which is easier to use, especially on the move, as it won't require you to move your eyes off the road while navigating.

Despite of it being based on a hatchback platform, the Mazda 2 still receives the same large open-mouth grille at the front which also gets a characteristic V-shaped chrome garnish which can be seen on its lower and side portions. One of its strongest design features in this segment can be found in its fog lamps, which feature a distinctive wedge-like housing with chrome inserts as well.

Right on its rear, the vehicle tells a different story – it gets a coupe-inspired profile. Such a feature allows the car to appear very aerodynamic, especially after the C-pillar section. Also notable is the inclusion of a boot lid extension which makes the vehicle look complete and ultimately attractive, unlike the series' hatch variant.

From its sides, the vehicle resembles that of its most athletic compatriots out there, thanks to its short dimensions coupled with sexy curves which are present on its side doors. Adding sportiness to the Mazda 2 are its door-mounted rear view mirrors and diamond-cut alloy wheels. 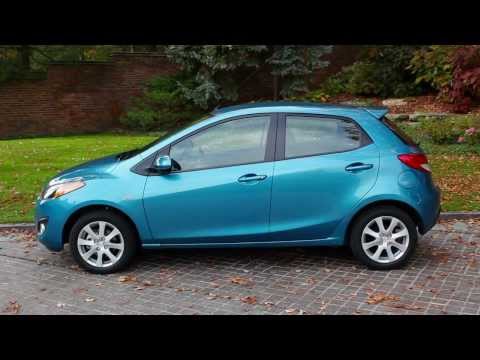 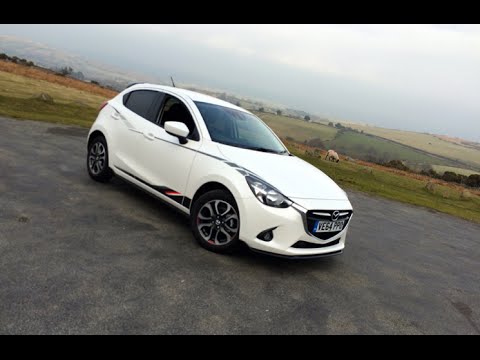