One of the most prominent figures in the realm of sports cars is the Mazda MX-5. And that doesn't even tackle what it has brought to the table just yet. In its decades-spanning existence, the series has sold almost 1.1 million units, ultimately making it as the biggest-selling roadster on the planet at the moment.

Now in its fourth generation, the Mazda MX-5 has received a much-needed mid-life update. By the popular series' standards, these modifications are considered to be huge, ones that center on its power. Now while the current refresh has stuck to its roots relative to its usual naturally aspirated petrol engines with no all-wheel drive or turbos, the current iteration's engines are now cleverer than ever, all thanks to the nuanced tech offerings Mazda's "Skyactiv" engine has provided.

The top-tiered 2.0 engine has now seen its power climbed by 24bhp to 182bhp. It also cuts nearly a second from the 0-62mph time, resulting to 6.5 seconds. Meanwhile, its rev limit has likewise increased by 700rpm to 7,500rpm. As it is, drivers have more fun in dealing with the engine through its six-speed manual gearbox.

Weight has also been shaved from the Mazda MX-5's most intricate engine components. Consequently, the unit is both punchy and efficient. There's also a stop/start feature and brake regen which eke out its fuel economy further. And for a car that is already exceedingly good at approaching 50mpg, this one is a milestone.

The Mazda MX-5 remains to be a gold standard as to why pure and simple sports cars can be so much fun to drive. Right on top is its lightweight offering that already makes it a standout.

Its 2.0 engine offers the better part of a mid-range punch, right alongside the obviously more energized top-tiered. Now while the 7,500rpm still isn't as dizzying as those older sports cars, this one still proves itself to be quite much interesting to be navigating on.

The MX-5 is notably softly sprung and remains comfortable in most road terrains. It is noted to cope easily with speed bumps and is not overly nudged by awkward surfaces. The sports car even manages to endure sharp-edged bumps when its larger 17-inch alloy wheels take center stage.

Meanwhile, the MX-5's2.0 Sport Nav+ and GT Sport Nav+ models both receive sports suspension with Bilstein dampers, resulting to a more concentrated handling setup. A firmer albeit decent experience with this setup is to be expected.

The rear-wheel drive of the MX-5 is nimble and direction is quick to change. It is also generally accurate and exudes a light-footed feel. Its steering is notably accurate, too, giving you the confidence to sweep the nose from one corner to the next with all that zest. Moreover, this is further elevated by strong levels of grip, enabling drivers to optimize the MX-5's true performance on the road.

In terms of noise and vibration, the current iteration of the Mazda MX-5 comes with an acceptability that is very much expected. The good thing in this regard is that the noise levels aren't too blustery while the roof is down, even at higher speeds. On the other hand, the MX-5 RF's metal roof is naturally more insulated than the soft-top with the wind noise still pronounced during motorway speeds. An intrusive whistle around its fastback body shape with the roof down is likewise to be expected.

Mazda didn't put much that effort to making significant exterior changes for the 2019 MX-5. As it is, the refresh still remains to feature a stylish profile. Perhaps the only feature most of its fans are seeking after is a permanently fixed roof for the future iterations.

Meanwhile, the BBS wheels also remain to be fantastic as they were.

From the get-go, the current generation Mazda MX-5 still banks on the series' pleasingly simple layout. As simple as it offers, it doesn't take minutes before someone gets to learn how most of its functionalities in its interior work.

Mazda has also given the MX-5 that nice reach-adjustable steering wheel. While it really doesn't come out that far, at least the brand has finally been lured in to show off in this regard.

In terms of space and comfort, you still need to be six feet or shorter in order to fully experience what it means to be a comforted passenger. When parked beside its stockier compatriots in its class, the MX-5 appears relatively dinky. Ultimately, taller people should still take one for a test drive first to ensure that they are comfortable and that their foreheads aren't as sensitive or fleshy for that matter, especially when the roof is down.

The new Mazda MX-5 still manages to surprise us in this segment with its updated doors that now open a bit wider, some reinforced cup holders, and the addition of proper smartphone link-up for its media screen.

The MX-5's driving seat settles at a very low set. As it goes, passengers will have to sit with their legs straight out forwards as if they were inside a go kart. The seat features a standard, tilt-adjustable base, which is a welcome addition; alas, it doesn't come with height adjustment.

The MX-5's steering wheel adjusts for reach and rake but taller drivers might wish it comes towards them a little further than what it provides. That being said, all but the tallest of drivers should be able to get comfy with its seats, so long journeys won't have to be a chore.

Now, there's a reason why you should avoid the MX-5's entry-level variant – it doesn't come with the 7.0-inch color touchscreen which forms the main interface and focal point of the dashboard from its other trims. Instead, the SE+ variants come with a single CD player, an AM/FM radio, two USB inputs, and a multi-function steering wheel.

If you want to pay extra, however, you'll get Apple CarPlay, Android Auto, sat-nav, DAB radio, and Bluetooth connectivity for SE-L Nav+ models and above, besides the bespoke 7.0-inch touchscreen. 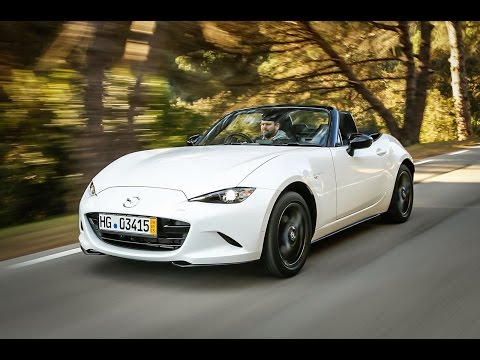 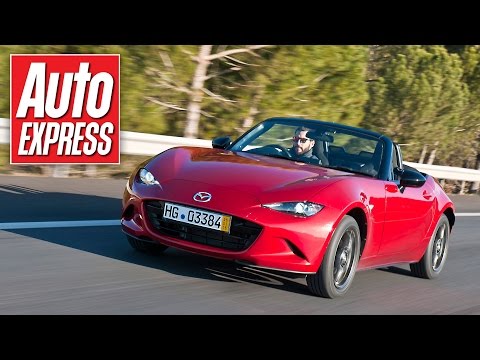