The Lexus GS is a medium luxury sedan that offers savage performance. In Japan, the Lexus GS is also known as the Toyota Aristo. The new Lexus brand was used in 2006 in Japan, and no longer uses the name Aristo. In its development, the Lexus GS has evolved in three generations. The third generation Lexus GS, the Lexus GS 300 has entered the Philippines market since 2008. Then followed by the next two Lexus GS series, the Lexus GS 200t and Lexus GS F, which became the two new luxury car variants since 2016.

As a premium sedan, of course, the Lexus GS has an impressive performance. We can see the Lexus GS 300 has an acceleration from 0-100 km / h which can be reached within 6 seconds. The highest speed reaches 230 km / hour. While the Lexus GS F has a top speed of 270 km / h and acceleration from 0-100 km / h in 4.5 seconds. The Lexus GS F also has a turning radius of 5.6 meters. Of course, the Lexus GS also has a pretty good braking system. 17-inch disc brakes embedded in the front and rear wheels of this luxury sedan. Also supported double wishbone front suspension and Multilink rear suspension, and steering wheel rack type AMD pinion. Thus, the passengers inside still feel comfortable when the car is doing in the uneven road. To drive, the driver can also change to driving mode as desired, ie Normal, Eco.

The Lexus GS is present in the luxury sedan car segment. Of course, this luxury car must face other competitors who are equally tough. The Lexus GS 300 and 200t compete with competitors such as the Audi A6 and BMW 528i Luxury, and the Mercedes-Benz E 400 AMG. But the Audi A6 is often referred to as its closest competitor. The Audi A6 is equipped with a 1.8 liter 4-cylinder engine that produces a maximum output of 190 PS and 320 Nm of torque. While the Lexus GS 200t with a 2.0 liter 4-cylinder turbo engine is capable of producing a maximum power of 241 HP and 250 Nm of torque. While the Lexus GS F, which has a 5-liter V8 engine with a power of 470 HP, it must deal with a BMW M5 that has a 4.4 liter engine with a maximum power of 560 HP.

The Lexus GS has a luxurious and classy exterior. The Lexus GS 200t brings noticeable changes to the spindle grille found in modern Lexus cars. Also given new changes to the triple beam headlamps, LED rear lights, and 18-inch alloy wheels with new designs. However, the design of the Lexus GS grille looks simpler and more similar to the Lexus ES sedan variant, with protrusions and indentations under the foglamp. The Lexus GS 300 relies on an hourglass grille, new wheels, wider fenders, darker rear lights, and a new design rear bumper. Lexus GS 300 has 18-inch aluminum wheels that look sporty, LED Taillight that makes it look attractive. While the Lexus GS F looks to have a sportier exterior. Like the Lexus GS 300, this model has an hourglass grille that challenges from hood to asphalt, new wheels, wider fenders, taillights with a darker color, new rear bumper with four exhausts that look fierce. 19-inch aluminum alloy wheels combined with Michelin Pilot Super Sport tires, front and rear spoilers made of super lightweight carbon fiber material, and LED taillight make the exterior of the Lexus GS F seem more masculine.

The new Lexus GS passenger cabin looks quite luxurious and comfortable. Inside the cabin there is a 12.3-inch touchscreen display that supports the Mark Levinson audio system with 17 speakers and is connected to the Lexus Navigation System. There is also a select drive mode, namely Eco, Normal, Sport, and the F Sport variant has an additional Sport +. All types of Lexus GS are equipped with a blind spot monitor, 10 SRS Airbags, vehicle dynamic integrated management. There is also a support head-up display to find out the driving performance quickly.

Luxury can also be seen from the interior cabin of this Lexus GS. The shift knob is coated with ornate leather that fits perfectly in your hand. There is also Optitron Technology on the MID screen to produce a clear and easy to read illumination display. This car is also supported by Artificial Intelligent Shift-based technology. It is also useful to provide information from the G sensor to lower the gears when braking and how much gear the current is lowered. Meanwhile the meter panel on the Lexus GS F looks like the meter on the aircraft cockpit, it looks sophisticated and modern. Passenger seat seats in the Lexus GS F type sport seats and sporty looking. In addition, advanced features also complement the interior of the Lexus GS F such as dynamic steering. 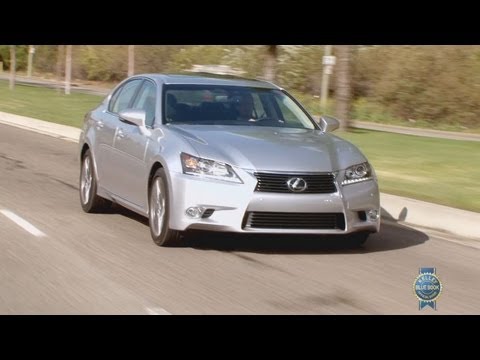