Otherwise known as the Kia Pegas in China, its local counterpart, the Kia Soluto, is Kia's latest addition to its now growing vehicle lineup. Internally launched in 2017 at the Auto Shanghai, the car markets itself as a subcompact, B-segment sedan that is also made in China by the DongFeng Yueda Kia. It is based on the PB platform that is shared with the Kia Soul, Hyundai Veloster, Hyundai Reina, Kia Rio, and Hyundai Accent. It slots right below the subcompact Rio hatchback.

In the Philippines, the Kia Soluto 2019 just recently debuted on January 30, 2019. It was launched in conjunction with Kia Motor Philippines' relaunch under the Ayala Corporation. Since its introduction, the car has aided the local arm of the brand's market share, all thanks to its competitive price and practical albeit efficient features.

Dubbed as Kia's "awesome little car," the Kia 2019 Kia Soluto is the ideal car for driving the metro. It is decidedly modern and its sleekness, redefined. The new Soluto serves as Kia's first of the three models that are set to be unveiled this 2019, as part of the brand's return in the local market. The second model was revealed in February 2019.

As an entry-level entrant, the 2019 Kia Soluto is deemed to be more than decent relative to its power output. This is all made possible by its 1.4-liter Kappa MPI inline-four petrol engine which produces up to 94 HP and 132 Nm of torque. This places the Soluto more advantageously than the recently released Honda Brio and the Nissan Almera. Essentially, the car also goes head-to-head with the likes of Toyota Vios in respect to its engine performance.

The 2019 Kia Soluto is also capable of overtaking and is noted to perform decently when trudging hills. Its power is sent to its front wheels either through a five-speed manual or a four-speed automatic transmission.

The 2019 Kia Soluto's steering is likewise easy to control, thanks to its electronic power steering. On metro highways, the Soluto can easily reach highway speeds.

One has to be wary of pushing it to the limits though as the Soluto may produce a noise that can penetrate its cabin. Nevertheless, it comes with a respectable suspension which readily handles small bumps and potholes. And with the car's size, you'd be amazed at how its brakes feature enough stopping power.

Despite of the 2019 Kia Soluto featuring a muted exterior styling, the car's interiors have a different story to tell. In essence, really, the vehicle's cabin easily attracts the more upmarket consumers. For instance, it comes with a tree-spoke steering wheel which is made more prominently bespoke with its silver and black accents; the seats are also all comfortable and spacious.

In terms of its instrument panel, however, the Kia Soluto appears to be a bit too Spartan for some consumers. Otherwise, everything is ergonomically placed. Its dash is made out of plastic material which if one has to knock on it, that familiar hard plastic sound is readily provided.

The 2019 Kia Soluto also sports a tight build quality in the inside. There are no known visible gaps on both the car's dash and inner door panels. In the same vein, the Soluto also offers tilt-adjustable steering and seats which could prove beneficial to consumers who sport a smaller stature. Meanwhile, its side mirrors can be adjusted electronically as well.

The 2019 Kia Soluto also features air-conditioning controls that are all easy to use. There are sufficient number of cupholders, too, apart from its door pockets, storage compartments right within the car's interior for all its consumers' package and storage needs.

If there's one thing that weirds its modern consumers, it is the Kia Soluto's placement of its windows controls in its interior. They are situated right on the center console which could require adjustment for some users.

In regards to its infotainment system, the 2019 Kia Soluto is equipped with a seven-inch touchscreen which also boasts of Bluetooth connectivity, aux, and USB ports. For modern consumers, the inclusion of Android Auto and Apple CarPlay is also appreciated. The sound of its infotainment system is then sent to a six-speaker setup which all performs well, and with the size of this vehicle, such an output should only be immersive.

Another key feature of the 2019 Kia Soluto is its decent leg and headroom space that can conveniently fit four people with two adults at the rear sites.

In terms of its safety features, the 2019 Kia Soluto is also the perfect car when navigating the oftentimes challenging streets of Metro Manila. It comes equipped with a slew of technologies and features which both ensure safety and convenience.

As such, the Soluto is all equipped with driver and passenger airbags which come as standard. Also included are anti-lock braking system and a rearview monitor with parking guidance. The car also comes with crash sensors and electronic brake force distribution. For the EX trim, the car features an extra security immobilizer system which improves the car's overall safety.

The new 4-door model Kia Soluto adopts Kia's new more upmarket design language. Right up front, it features a slim tiger nose grille that is flanked by angular headlights. The lower section of its front fascia, on the other hand, boasts a large trapezoidal intake, equipped with fog lights that are integrated into the car's lower corner.

On its sides, the 2019 Kia Soluto features clean lines and an evident shoulder crease that runs the vehicle's length. Meanwhile, the car's rear receives angular combination taillights, besides a license plate recess that is located on its bumper which all adds to its much neater look.

All things considered, the newest refresh of the Kia Soluto thrives on simplicity and is all positioned, since its debut, to target the younger segment of the automotive consumer in the Philippines. The Soluto simply exudes function over form – and that is a feat considering that the car still carries a conservative and sedate look. 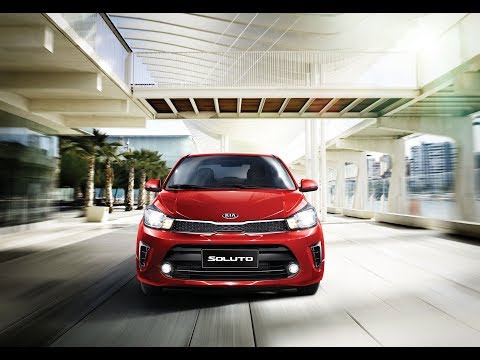 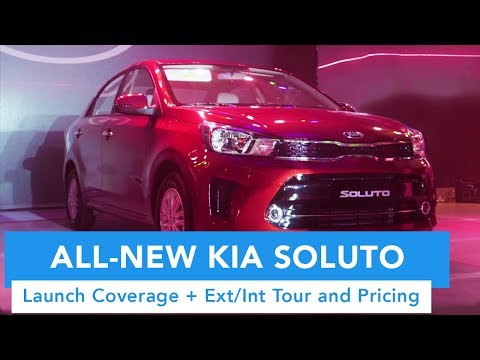