The Jeep Wrangler is a compact and mid-size four-wheel drive off-road roader and sports utility vehicle (SUV), manufactured by Jeep, currently in its third generation. The vehicle is introduced to the world in 1986 replacing its predecessor Jeep CJ. Jeep is an all-American is a well-known icon that reflects the independence and adventure for more than seven decades. The vehicle is widely recognized as an off-road vehicle that's fancy and stylish enough to drive inside of the city.

The vehicle is well adored by celebrity alike as well as those who opt for a high-performance off-road vehicle that comes in a much compact size. The Jeep Wrangler holds its value and is pretty customizable if desired. It's hard to compare the Jeep Wrangler with any other normal category cars. The Jeep category itself is a very desirable style for many but the draw backs you'll experience with it is the fact that it meant for off-road driving that's why it will be very different when driving in normal roads. Fuel mileage return, and cargo space are also one of the issues you can expect when driving a vehicle in this category.

Many had tried to challenge the Jeep Wrangler in this segment, one favorite rival of the vehicle is the Toyota FJ Cruiser. It was a close competition giving the Japanese vehicle an upper hand in terms of power and design. The Toyota FJ Cruiser provided better output even on its base model which was a strong selling point of the vehicle. Even the interior design of the vehicle gave a functional yet funky design livening up the segment. Another point the Toyota FJ Cruiser received was because of its suicide doors which was a segment first. With the Japanese brand's well established in every country and being trusted as well, many believed that it would take the crown away from the Jeep Wrangler. Sadly though, the vehicle reached its conclusion and production was stopped several years after its release.

The Jeep Wrangler is powered by a powerful 2.0L Turbo-charged engine with 268hp and 400Nm of torque mated to an 8-speed automatic transmission. The Jeep Wrangler compromises the capability of delivering a decent mileage of 9.8 km/l. Power delivery is subtle and engine response is great. Driving it in hard conditions shouldn't be a task. The Car handles pretty good and directly gives a nice feed on the direction of the tires. The Jeep Wrangler is one of the most loved vehicles in the united states. The Wrangler is purely breed to provide power and to endure any terrain you throw at it.

The Jeep Wrangler excels well on terrain or mountain paths where most vehicle won't be able to access. It provides an ease of mind and confidence when driving to these types of roads. Also, thanks to its high ground clearance, the Jeep Wrangler wouldn't have an issue regard high rise water or floods. Its compact but rigid body is sealed tight assuring no water will get inside the cabin. The handling features are best described as "moderate," it steers where you want to be and goes where you direct it to. The front and rear suspension are composed of a soft off-road suspension giving it a bouncy by pretty good and comfortable drive. But when you floor the gas and going to a halt, the body roll might surprise you. Due to its soft suspension, there are times where you constantly need to adjust the steering as the vehicle easily wander across the lanes on the road.

The behavior of steering is also unusual. There is very little return-to-center motion, which means you will need to adjust the steering wheel every time after you complete a turn rather than just letting the letting go and let the steering wheel turn itself. A lot of these rough edges are smoothed out by the four-door model, called the Unlimited; its longer wheelbase adds significant stability to the formula.

Contradicting to how it handles on the streets, the Jeep Wrangler is one incredible vehicle when driving on tough roads. The Jeep Wrangler can go easily on place where men and even cars alike have trouble reaching.

Surprisingly, the Jeep Wrangler only received a more than average score on its Crash-test by the US National Highway Traffic Safety Administration. The new Jeep Wrangler is available with either 2 doors or a4 door setup. The 2-door setup is offered with the variants Sport and Rubicon. The 4-door setup, on the other hand is available with Rubicon Unlimited, Sport Unlimited and Sahara Unlimited. The color options available for the Jeep Wrangler are: Anvil, Baja Yellow, Bilet Silver, Black, Bright White, Copperhead, Dune, Firecracker Red, Granite, and Hydro Blue.

The Jeep design is an American original with other manufacturers seems to be doing their best to mimic and offer a similar type of vehicle to compete with it. Sadly, the Jeep legacy is too strong and although time have passed. Many is still in favor with the vehicles classic look. Time have passed but Jeep yet deploys the same design language on the current Wrangler. Jeep was able to add a modern vibe to the vehicle without moving far away from its roots and the end result is pretty much welcomed by its fans.

Next to an original Jeep, park a Wrangler and the resemblance is clear. Over the years, the design has become significantly larger and safer, but like the Porsche 911 and Volkswagen Beetle, if you've seen its forebear, there's no mistake with the current Wrangler.

The new Wrangler combines all the possible design elements which result in all-weather capabilities to this SUV while giving exceptional on and off-road performance. Its front fascia appears to have a new set of headlights and updated grille design. It has a powerful and peppy front bumper for commanding stance. The vehicle has a high ground clearance, touch 17-inch alloy rims along with bold tires and a spare wheel that gives it a dominating appeal to its rear profile. It also has a more rakish widescreen to help it cut through the wind better. The vehicle comes with a huge sunroof and with a removable feature as well as completely detachable doors.

Another reason why the vehicle is adored well in the united states is that the Jeep Wrangler comes with a lot of after market upgrades. You can deliberately change every part outside of the vehicle and turn it to whatever style you desire. The Wrangler is built like a Lego where you can easily interconnect or change each part. Aside from a mass amount of selection for after parts accessories, you can also do it yourself since Jeep made it simple and easy for consumers to change the parts themselves.

The interior design of the new Jeep Wrangler is enhanced with lots of comfort features. Its modern upholstery, embroidered stitching along with heated front sealing and illuminated cup holders are the part of its adventure-class features. Inside the new Jeep Wrangler has a large storage space. The passenger can also experience comfortable and suitable features such as heated, leather-trimmed front seats, illuminated cup holders, an auto-dimming rearview mirror with integrated LED map and lighting in the footwells.

As a modern-day car, the upgrades inside the vehicle is very notable. Gone with the conventional simple design where you don't have to worry and just wipe everything off when needed. The dash board of the new Jeep Wrangler and steering wheel is one of the most noticeable changes made inside. The overall layout is still kept simple with a brush of modern-day design which should click to both the young and adults.

One part that has not changed is the cabin space where strictly speaking isn't a very joyful place for the rear passenger. The leg room is minimal which could be difficult for passengers who are on the plus side. In addition, getting in and out of the vehicle might also be a challenge due to the small but high frame of the vehicle. Head room is decent enough and the cargo space is also moderate for your everyday or overnight needs. You also have the option to flat out the rear passenger seats for an added space for your outdoor activities.

Because the Wrangler's cabin isn't really physically big inside, you'll need to prioritize whether you be riding people or carry a bunch of stuff, choosing both isn't really an option. At the back, you have a total of 12.8 cubic feet of space. Flat out the rear seat and you can have a maximum space of 55.0 cubic feet. But by doing so will only allow you to ride 1 person making it a two-seater SUV which isn't really practically. so, if you need to carry more people when you get to where you're going, it might be a problem. The four-door Jeep Wrangler Unlimited is much larger, with the rear seats up. you have 31.5 cubic feet of space, fold it down and you get a total of 70.6 cubic feet. It also more suitable for people who need to transport people and things together on a regular basis. 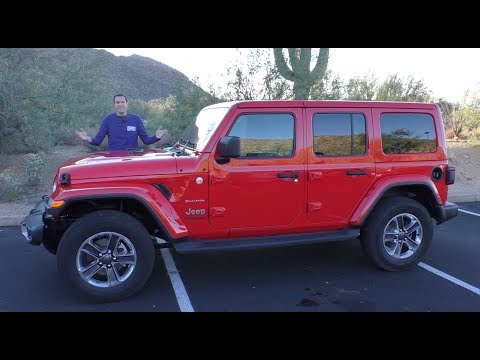 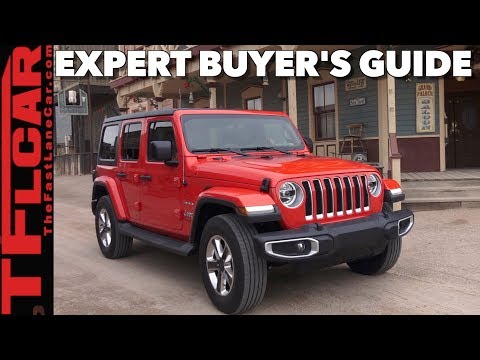