The Isuzu mu-X's reputation as one of the most favorited SUVs in the Philippines has always been warranted. And without a serious contender in its segment, this entry is also easily one of the most popular.

The Isuzu mu-X was first released in the country in 2014. The fact that it is a mid-sized SUV with a 7-seater layout did help made it an instant hit in the domestic market. This SUV boasts of an authoritative stance and size that are sure to get attention while on the road. It is perfect and practical to use in the Philippines, great for quick out of town trips for your friends and family or for just as daily driven car with any special someone in your life.

The Isuzu mu-X is offered in three engine trims. The smallest of which comes with a 1.9-litre RZ4E engine which makes 148 PS of power and 350 Nm of torque; the bigger 2.5-litre engine, on the other hand, makes a lesser 134 PS of power and 320 Nm of torque. Finally, the most powerful of its engine offerings is equipped with a 3.0-litre motor which is capable of revving up a maximum power of 175 PS and a 380 Nm of torque.

In 2016, right when its sibling the Isuzu D-Max got it much-needed facelift, the Isuzu mu-X 2018 has finally been released with its equally-deserved list of modifications inside and out. The segments below aim to describe in detail what the newest entrant offers at the moment.

Inarguably the most headline-grabbing feature of the new Isuzu mu-X can be found and experienced with its maximum power output, only rivaled by class-leading efficiency. Meanwhile, its low emission features and the brand's already renowned durability are all made possible and more pronounced by the new BLUE POWER EURO 4 diesel engine. Other notable features of the new Isuzu mu-X are its 4-cylinder in line Blue Power diesel engine, the Bi-LED headlamps, the Horizontal Rear Combi Lamp with LED Positioning lamp, 6-speed automatic transmission with sequential shift, the soft-pad interior with piano black accent and blue ambient light, multiple USB charging ports with 12v accessory socket.

The Isuzu mu-X most prime feature without a doubt relative to its performance is the inclusion of the Blue Power Technology. This can produce a considerable bump 177 PS, which is significantly more efficient than the 166 PS which is revved up by the previous engines.

It is capable of 134 horsepower at just 3,400 rpm along with a peak torque of 320 Nm at 2,800 rpm. The power is sent down to the rear wheels using a 5-speed manual gearbox. Then, the powerful 3.0-litre, a four-cylinder engine was introduced. It is much capable of making a maximum power of 175 hp at 3,550 rpm and a peak torque of 380 Nm, which comes at just 1,800 rpm. For its transmission, the engine trim has a 6-speed automatic transmission option only. Although, it is available in both AWD and RWD drivetrains. The engines are quite powerful and smooth on the accelerator. It has the 1.9-litre model which is extremely an efficient car and has very less audible engine noise. The Isuzu mu-X is not only powerful and pleasurable to drive, but it is also safe for all the passengers inside. The Isuzu mu-X has a sturdy build on the outside along with the steel skid plates.

In terms of its off-road performance, the mu-X's engine is still as it was before – a bit on the noisy side and vibrational. Despite these, the refresh is more than capable as an off-road SUV than most of its compatriots. Its impeccable performance, apart from its engines, is also made possible by its body which made of a ladder frame chassis, propelled by four-wheel driving fans. These are considered as a steel skeleton which allows a more-than-decent level of torsional robustness and rigidity for the variant.

The Isuzu mu-X offers a lot of safety features, this includes an airbag each for the driver and also for the front passenger and seat belts for all the seven occupants. It is handled by ABS along with electronic brake-force distribution and brake assist. It also has a day and night-type rear view mirror, Anti-Theft Alarm System, Vehicle Immobiliser, Reverse parking sensors, and camera are added for more convenience. It also features both Hill Start Assist and Hill Descent Control. The cruise control, Electronic stability control, and Traction Control System are also added, in case you want to cruise on the highway at a high speed.

Isuzu, one of the well-known automakers in the Philippines, was able to make the new vehicle more exciting by making the interior be more upmarket. The Isuzu mu-X in particular, is built as a 7-seater, which can take your family and friends to any off the road escapade. It has several storage options, which assures ample space for any travel necessities and luggage. Passengers will be entertained by a premium touchscreen head unit that is standard for the top-of-the-line variants. It has the cabin finished with a piano black finish and all the sides, including the dashboard. It has given some soft-touch plastic as opposed to the hard ones on the previous model. The standard plastics and other switch gears are now given a more premium touch and look.

Apart from its 8-inch touchscreen, the Isuzu mu-X also offers an Audio-Video display with a Navigation system and can be connected using a USB and Wi-Fi. Ultimately, the comfort inside the vehicle is always top-notch, if not premier. It comes with an automatic climate control doing the shifts here. Aside from touchscreen panel on the dash, it also offers a 10-inch DVD monitor display mounted on the roof so that the passengers do not suffer boredom on long trips. There are premium touches on the cabin, including a leather-wrapped steering wheel with good quality stitches and audio control buttons. There are headrests for all the seats, including the third row. It has a total of six speakers including two tweeters. The rear row is foldable, which can increase more for the boot space.

Cabin space has also been one of the strongest points of virtually all the Isuzu vehicles. And with the Isuzu mu-X 2018, this feature is made even better. Its boxy and square-like body appearance expertly complements its no-frill seven-seater offerings, ultimately distinguishing itself from other Mitsubishi rivals. Also thanks to its folding seat mechanism, the 2018 mu-X comes with a great cargo flexibility, one that can provide more room by simply folding the third-row seats when in use. Nevertheless, the Isuzu mu-X 2018 didn't come without some few missteps. First on the list is its lack of telescopic adjustment in steering column which could make some users a bit on the uncomfortable side. Secondly, its fascia layout appears to have focused more on style than its function, which makes this latest entrant still behind its rivals. Now, while the vehicle's third-row seats can indeed be folded when not in use to release more space down the line, its overall usage, according to most, could have been more improved.

All things considered, the new Isuzu SUV is clearly gunning for a better outward visibility and more soft-touch details to finally bring its famed cabin ambience to a whole new level.

The changes in the exterior design of the new Isuzu mu-X are minor at best albeit very cool on the surface. The vehicle is now redesigned with a new bumper, plus more mantles on its lower half. Its headlights are also made more modern – ones that incorporate daytime running lights and a light signature. Perhaps the 2018's version's most prominent and distinctive exterior feature can be seen on its new grille which creates more creases near its headlights in the process. Its fog lights, on the other hand, are now adorned with more chrome details.

From the get-go, you'd know that the Isuzu mu-X is one of the most sharply designed midsize SUVs in the Philippines. Up at the front, it has new headlamps cluster with LED projector lights and well-integrated DRLs. The grille has a lot of chrome embellishment on it and imparts a lot of sheen to it. The fog lamps are placed in a pool of cladding and have the air intake adjacent to it. The wheel arches are wide and house large 18-inch wheels. The 1.9-litre base variant rides on 16-inch units. The ORVMs and door handles are dipped in chrome, barring the base variant, which only gets material black units. The rear gets LED positioning lights.

When it comes with the roof rails, it's not that huge and has a capacity of 60 kgs. The tailgate can be easily open and lifted electronically. It isn't very curvy or edgy to be burning the eyes but is more likely to be pleasing, much like the latest iteration of the Toyota Fortuner. The Isuzu mu-X was initially introduced with a 2.5-litre, four-cylinder engine, which is a very modest one. 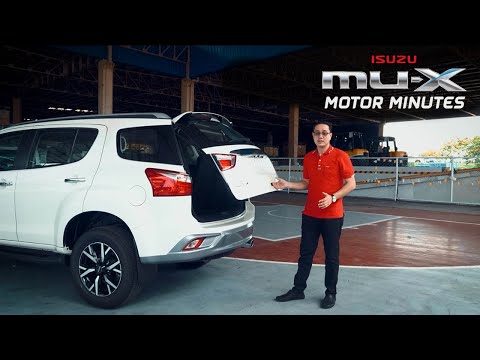