Honda Mobilio – A Powerhouse on Innovation

Honda is not a new name in the Philippines. Since its first foray in the country, the Japanese carmaker has always been known for its cutting-edge technology in the automotive segment. One vehicle that currently exemplifies its painstaking effort to innovate is the new Honda Mobilio. Apart from its breakthroughs in automobile, Honda is also a powerhouse in the aesthetics segment – a feature which the Mobilio is also well-known for. And with its tried and tested formula in its design language, this inevitably challenges all its rivals in the country.

Honda launched its Mobilio MPV in the year 2001 and since then, there hasn't been a need to look back. It gave modifications and tweaks to this MPV over the years to keep it updated, relative to the needs of its customers. The stylish vehicle has a close rivalry with Suzuki Ertiga and Toyota Avanza in its segment.

In the latter part of the 2010s, the Honda Mobilio has easily become as one of the more viable options over the steep 7-seater SUVs or C-segment MPVs in the country, and with it being affordable is just one of its distinctive hallmarks. True to the series, the latest entrant is also fuel-efficient and conveniently airy. Ultimately, the Honda Mobilio is best situated in a segment that perfectly balances both its height and width. And whenever you feel like your SUV is too tall or your chosen van is a bit on the bigger side, the Mobilio should be able to save your day right in its special class.

Right below are just some of the vital tidbits about the Honda Mobilio:

Perhaps the most evident change the new Honda Mobilio impresses upon on the onlookers and the hardcore fans alike is the design language on its front. For the most ardent of followers, the refreshed variant now comes with a unique face, distinctive from that of the Brio. The fresh entrant features a more mature face which easily complements the general look of MPVs. Also thrown into its new identity are the solid wing face grill, the tapered headlights, and the reshaped front bumper. The 2018 Honda Mobilio also continues the tradition of the Japanese automaker on its emphasis on safety of their occupants. It boasts of a G-con body structure which features a capability to absorb impact energy, subsequent to a hit or collision. Other protective features comprise of a seatbelt reminder for the driver, engine immobilizer, and security alarm.

Honda has also elected to equip the newest Honda Mobilio with a more efficient braking feature by packing ventilated disc brakes right at its front. The entrant's rear pair, on the other hand, is also armed with drum brakes. And to avoid any needless jerks during some occasional bumpy rides, the company opted with a McPherson strut and coil spring with stabilizer suspension, placed at its front wheels. Also appointed are a torsion beam axle and coil spring suspension situated right at the wheels on its rear.

Moreover, the 2018 Honda Mobilio has managed to retain most of its noted offerings from the previous entries. Notably, the dual front airbags, the Anti-Lock Braking System (ABS) with Electric Brake-Force Distribution (EBD), and Speed-Sensing Door Locks. And these are not even the best part. As most users of the series have come to experience, each and every variant of the new lineup comes with virtually the same set of security features. Regardless of the entry you choose, you still get to be worry-free relative to you and your family's security.

The Honda Mobilio won't be as noted as it is today without its amenities that are deemed to be popular among the mini MPV enthusiasts. Chief of these features is the keyless entry which ultimately provides comfort to the driver. The keyless entry feature also comes standard in all variants, easily giving the users the uncomplicated access to their vehicles without any compromise on the security of the vehicle.

Next on the list is the vehicle's rear air-conditioning vents with independent control. As such, the passengers located in the rear can adjust the temperature at their own will. And that also goes for passengers situated right at the back-most seat.

Honda is well known for its cutting-edge technology which is provided through its efficient i-VTEC engines throughout its fleet. The Honda Mobilio comes packed with a 1.5-litre chain drive SOHC engine irrespective of the trims. The engine is good enough to knock out a maximum power output counting to 120 PS at 6600 rpm along with a maximum torque showing 145 Nm at 4600 rpm. It has good responsive engines, both of its transmissions whether it is 5-speed manual or CVT mated with Honda patent highly advanced Earth Dreams Technology which boosts the overall performance of the engine. Honda engine is in compliance with Euro 4 emission rating, this to ensure that the carbon emissions are within the limits.

When it comes with fuel economy, expect it to run up to 10.8 kmpl in city drives and 14.1 kmpl on highways maintaining a combined mileage of 12.4 kmpl in standard conditions. For a family drive, it is not meant to race on the tracks but still, the acceleration is decent enough counting to 13 seconds from naught to 100 kmph with a top speed attaining to 120 kmph. Honda is one automaker that gives special emphasis to the safety of their occupants irrespective of the segment of the car. For Honda Mobilio, it also has G-Con body structure which is capable of absorbing impact energy after a hit or collision. It has dual SRS airbags for the protection of the driver and front seat occupant are also packed in this drive.

The safety and stability of this family MPV come with an Anti-Lock Braking System (ABS) and Electronic Brake-Force Distribution (EBD) are also equipped. It also includes protective features like the seatbelt reminder for driver and keyless entry system. It also has an engine immobilizer and security alarm are included for the safety of this vehicle against any theft. Honda Mobilio is packed with ventilated disc brakes at the front while the rear pair is equipped with drum brakes.

It is also equipped with the McPherson strut and coil spring with stabilizer suspension at its front wheels and torsion beam axle and coil spring suspension at rear wheels are appointed, this helps avoid any jerks during bumpy drives. The Honda Mobilio comes with a choice between 2 colors - the Lunar Silver Metallic or Crystal Black Pearl. It also offers several exclusive colors such as Phoenix Orange Pearl and White Orchid Pearl for the RS Navi variant, Brilliant Sporty Blue Metallic for the RS Navi and V CVT, and Taffeta White for the V and E variants.

The newest Honda Mobilio's front resembles that of the Honda Brio and Amaze. It has thick chrome finishing at the front radiator grille that gives an upper class feels while the sharp headlamps merging into this grille make it look wider and more sophisticated.

It has crisp creases all over the side and front profile which give a sporty touch to this family MPV. The dark side pillars and uplifted rear add more to the aesthetics of this car. The Honda Mobilio has a compact structure in comparison to its closest competitors but shows a sturdy and strong stance while running on the road. It has a perfect fusion of contemporary styling with functionality and practicality, this Honda Mobilio has 15-inch alloy wheels with 185/65 R15 tires which ensure stability and safety while running on any terrain.

The Honda Mobilio is designed for the comfort and convenience of the occupants. It has an ergonomic layout ensures that there is enough space for all the 7 passengers even if they have to travel to lengths. It has the all-black interior which offers a sporty feel and together with the chrome accents at the steering and infotainment facility add elegance factor to it. Now, seats have been wrapped with upgraded fabric upholstery which looks decent enough for an MPV of this class. There are power door and windows, sliding and reclining bucket type front seats with fixed headrests and manual air conditioner. The entertainment onboard is taken well care of and a facility comprising 2 to 4 speakers depending on the trim with USB, AUX and Bluetooth are offered.

For the Honda Mobilio, 1.5 V Navi CVT Limited Edition and 1.5 RS Navi CVT trims offers a 7-inch touchscreen with navigation and CD or DVD. It has a trunk worth of 223-liter which can be expanded to a maximum of 521-litre after split folding the rear seats to flat. The Honda Mobilio is a good 7-seater family MPV that has an attractive styling to appeal to the customers. 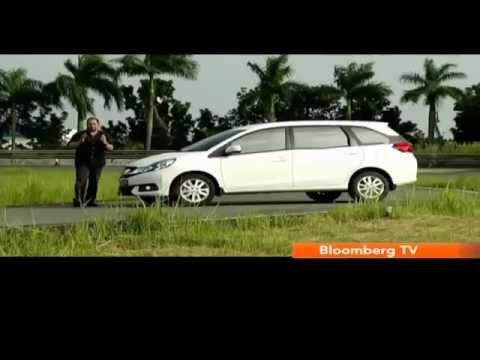 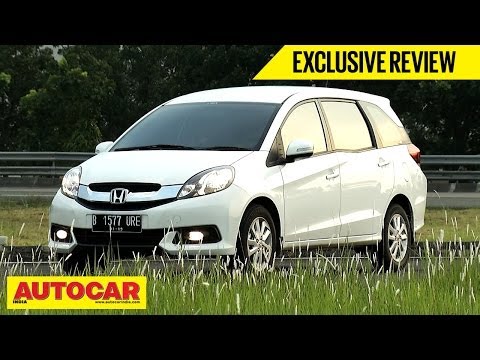