The Geely Philippines' newest entrant in the local automotive market after a marked hiatus is the Geely Coolray.

The subcompact crossover was launched on September 25, 2019 in the Philippines, bringing with it three variants – the 1.5-liter three-cylinder turbo gasoline engine Dual VVT powering through these models. The engine is noted for its production of 177 hp and 255 Nm of torque that is sent to the front wheels through the 7-speed wet dual-clutch transmission.

The Geely Coolray is targeted towards the now-growing crowd of millennials and youngsters in the market. Its apparent lures can be seen rightly on the car's lines and angles, which successfully distinguish the crossover apart from the other small SUVs in its class.

The Geely Coolray is based on Geely's concept of "Racing through Space and Time," which emphasizes confidence, boldness, and athleticism across its portfolio. The car comes standard with 17-inch wheels on the base Comfort model. Its mid-tier Premium and top-of-the-line Sport variants, on the other hand, feature 18-inch wheels. Its Sports edition also comes with a black roof donned with a panoramic sunroof and numerous carbon fiber accents.

The Sojitz G Auto Philippines currently serves as the Geely Coolray's importer and distributor in the Philippines. The company is also the newest member of the Sojitz Corporation group.

Under the hood, the Geely Coolray is equipped with a 3-cylinder 1.5L turbocharged petrol engine that produces a maximum of 175hp and 255Nm of torque. Such specs on paper are more than enough to push the crossover to more-than-respectable performance.

The Geely Coolray's engine is then mated to a 7-speed wet dual-clutch transmission. The vehicle is also noted to be capable of achieving 0-100kph in 7.9 seconds. Meanwhile, its fuel consumption performs decently, right at a rated 15km/L. Its fuel tank capacity, on the other hand, is maxed out at 45 liters. The Coolray also comes with a Euro-5 standards compliant.

The new Coolray also comes with a slew of much-welcomed driver-assist perks. These include a 360-degree view monitor expertly produced by its four exterior cameras, alongside an auto-park assist feature. It also brings a string of modern features such as Intelligent Cruise Control, emergency braking with pedestrian recognition, electronic stability control, blind-spot detection, tire temperature, besides pressure monitoring. These are staggering as most of these options can only be availed on pricier SUV models.

It is in its cabin where the Geely Coolray truly impresses. From the get-go, users can appreciate the abundance of leather inside, which is still quite a feat in this price range. For instance, its dash is flushed in red leather while its black leather seats are conveniently stitched with the same red offerings for contrast that is nothing short of complimentary at the same time.

Inside the vehicle, you'll be surrounded with soft touch materials. From the steering wheel, sidde panels, and up to the arm rest. Finally, its interior look is sealed off with silver, gray, and black plastic accents.

The new Geely Coolray also comes with a jet-throttle-inspired e-shift plus a curious-looking handle placed between the middle of the cabin and the passenger seat. The design should come in handy when shifting is very much needed. The air-conditioning is controlled via traditional knob controls. Talking about the A/C, the Coolray's vents sport a spaceship-like aesthetics, which pushes further its modern aspirations.

The Geely Coolray's gauge cluster features a 7-inch LCD instrument panel, which can be customized relative to the driving mode that is selected. This feature, though, can only be experienced when opts for its Sport variant. A 10.25-inch HD touchscreen, on the other hand, is placed at the center of its dash, which reads infotainment and connectivity. All of its controls are conveniently placed within arms' reach.

There is also a short electronic shifter placed for users who often bring small items with them. This should also benefit those who are always on the go as it houses charger ports for smartphones and other gadgets.

The Philippine edition of the new Geely Coolray comes equipped with a panoramic sunroof.

If you've been following the development of Chinese cars in the country arduously, you'd be surprised to see just how deviant the new Geely Coolray is. And in its case, it proves that there is still something to be appreciated when someone chooses to deviate.

The car's grille which also illustrates the company's logo is attention grabbing from the front. Completing what decidedly appears to be a prominent feature of the vehicle are its foglamp housings, which dignify its front bumper quite nicely.

The Geely Coolray also features smooth lines and edges which meet the front, all the way to its rear end. The chrome coated lining connects all the way to its taillights. And although its back design is simple, it still supports a neat spoiler right up top.

In terms of color, the Geely Coolray retails varying color variants relative to its trims. For the top-of-the-line variant, the vehicle comes in Orange, Vermillion, and White. The lower edition comes in additional Blue and Silver options. All color variants feature a two-tone design, all complete with a black top for the two top-tier models. 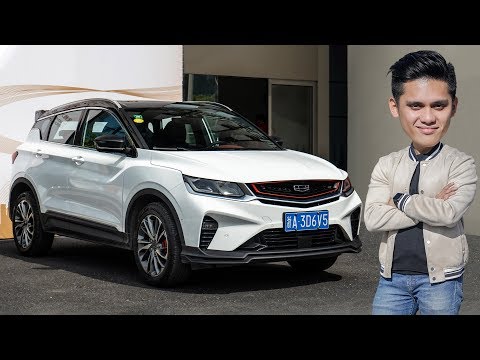