The official launch of the Ford Ranger Raptor in the Philippines was initially met with apprehension. And for good reason – Filipinos were already familiar with the Raptor badge, one that was associated with the worst variant of the legendary Ford F-150.

But as soon as its leaks surfaced in the wild, all the pent-up tension that was felt for the variant generally diminished. The rest is history.

Flash-forward to today, we are all graced by the all-magnificent 2019 Ford Ranger Raptor. The extreme off-road performance variant of the 2019 Ford Ranger, the mid-sized pickup truck banks on the core capability of the range of vehicles it comes from and carries the familiar Ford Performance DNA design language.

Among the highlights of the Ford Ranger Raptor include:

The Ranger Raptor's powertrain sports a top-tiered technology which offers more power and torque, while providing better fuel economy, less weight, besides its off-road specific calibrations for a number of key features in this segment such as transmission, driveline, and brakes. The Ranger Raptor is mated to a 10-speed transmission, one that is combined with a new 2.0-liter Bi-Turbo diesel engine which produces a maximum of 213 PS of power and 500 Nm of torque.

Durability is also a hallmark that can be relied on with the Ranger Raptor's powertrain. Ford engineers were noted to have tested running a "thermo cycle" on its engine, by heating both turbos to the point of glowing red for 200 hundred hours continuously. Consequently, the engine appeared to have endured the torture, all made possible by its turbo bearings and low-pressure (LP) turbo that is water-cooled, ultimately reducing temperature.

Meanwhile, the Ford-engineered 10-speed automatic transmission is shared with the F-150 Raptor and is also created with the familiar high-strength steel, aluminum alloys, and composites which all readily optimize its weight and durability. Navigating with 10 gears also entails that there is a wider ratio-span which results in a better acceleration and responsiveness.

The Ford Ranger Raptor's engine also features an all-new electronic system which features real-time adaptive shift-scheduling algorithms which are specifically engineered to ensure that the right gear is selected at the right time. Meanwhile, a distinctive transmission calibration is also included, one that boasts of a "Live in Drive" function – an indication that its paddle shifters are always ready for manual gear selection override.

The 2019 Ranger Raptor comes with six driving modes, which enable the drive to select a mode for virtually all the driving conditions out there. These include the on-road modes which are categorized into normal and sport modes and the off-road modes which are broken down into grass/gravel/snow mode, mud/sand mode, rock mode, and baja mode.

The Ford Ranger Raptor features a unique set of design cues that is all functionally driven. The most prominent is located at its front – the eye-catching new grille which borrows its styling cues from the F-150 Raptor.

The vehicle also comes with a frame-mounted front-bumper system which is designed to provide durability performance in deserts, and an unmistakable presence on top of that. Its front bumper also attempts to be seen amidst its prominent details with its new LED fog lamps, plus its functional air-curtain ducts, helping the variant to reduce its body's air-resistance.

Another complementing design feature can be found in its front fenders. With the use of composite materials, its accompaniment resists dents and dings which are often caused by off-road usage. On the other hand, the fenders' flare shape aids the vehicle when it engages itself in long travel suspension or when it is dealing with oversized tires.

The Ford Ranger Raptor's stance is evidently bigger from every angle. It stands at an impressive 1,873 mm tall, with a width of 2,180 and a length of 5,398; it also features a wider front and rear tracks settling at 1,710 mm. The entrant's noted ground clearance is set to 283mm.

A streamlined Ford Performance DNA can be gleaned right inside the Ford Ranger Raptor, besides the brand's usual high level of craftsmanship, all adorned with complementing hues and durable materials.

Its seats, for instance, are specifically design for off-road high speed performance support, allowing the driver to navigate it with a zestful handling while also providing a reliable, on-road comfort. Practicality isn't an abandoned feature in the interior of the vehicle, all thanks to the use of technical suede on the seats which add a convenient occupant grip.

The cockpit in the Ranger Raptor is also inspired. Everywhere you look, there's an ounce of blue stitching and leather accents. Ford has opted to go on the aggressive with the styling on its cluster, which is also evidenced by a host of Driver Assist features.

Perhaps the most unique design feature that doesn't screen Ford inside is the vehicle's steering wheel. Touted as the next-level DNA for the series, it features lightweight magnesium paddle shifters for crisp gear changing and accessibility which can also be found near the perforated leather hand grip sections on its rim. The steering wheel is finished off with the Raptor logo all debossed into the sophisticated bezel. 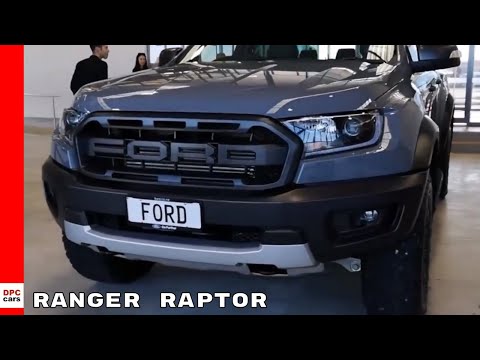 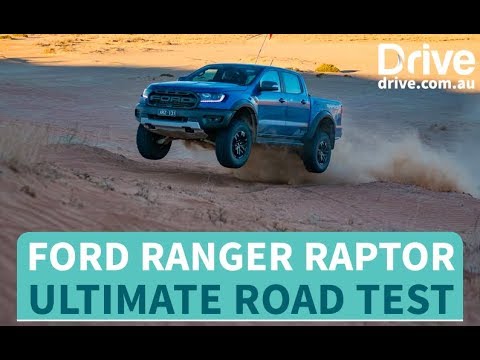