The new redesigned Ford EcoSport now comes with a new front-fascia, new interior and a new engine. The Ford EcoSport by far is the best-selling compact SUV/Crossover in the country since it first came out in 2014. The new Ford EcoSport doesn't just sport a newer look but is also better in performance compared to its predecessor. Ford has happily addressed the issues of the former model and gave the new Ford EcoSport the boost it needs without moving away from its roots. The vehicle though still not a powerhouse in terms of engine power but is now more agile and requires effortless driving to produce the exact amount of speed thanks to the newly available EcoBoost Technology. Confidence in driving should definitely be a plus factor in deciding whether to buy the new Ford EcoSport or not.

The Ford EcoSport is a compact SUV/Crossover that has already seen two generations anywhere in the world; was initially produced in Brazil by Ford Brazil at the Camaçari plant since 2003. And then a global second-generation model that was first featured in 2012. It was assembled in new factories in India, Thailand, and Russia. The Ford EcoSport provides a combination of sophisticated design, luxury and durability. Coming from one of the largest automakers all over the globe, Ford surely knows how to make a durable vehicle in addition to their expertise in the large 4x4 pickup truck segment.

The Ford EcoSport might not be for everyone in terms of pricing as the pricing starts at around PHP 1M for the base model. The trim-level to get is certainly the 1.0L EcoBoost which is priced at PHP 200K higher. Although pricing might be steep, remember that the all-around quality is above average and you're definitely getting your money's worth. The new Ford EcoSport can be your daily driver, family car or even out of town car.

If you're looking for a compact SUV/Crossover with world class performance and decent space, the 2019 Ford EcoSport is definitely one car worth checking out. If you love the Ford Fiesta but want a taller vehicle with more space, the Ford EcoSport is the next option you should be checking. It can easily cater for both the young and adult, single or family, beginner or experienced driver. If fuel efficiency, comfortability, cabin space, and safety features are your concern, worry not as the Ford EcoSport has them all.

The previous Ford EcoSport came with several issues like being under powered and bumpy ride. The new Ford EcoSport, on the other hand, has addressed these issues. Under the hood, the 2019 Ford EcoSport is powered by a 1.5L twin independent variable camshaft timing (Ti-VCT) engine and a 1.0L 3-cylinder Turbo engine with Ford's EcoBoost Technology, available in both 6-speed automatic or 5-speed manual transmissions. The vehicle comes with an engine with refined, smooth and economical which the buyer wants from a car.

The 1.5L Petrol engine produces 123 PS and 150 Nm while the 1.0L EcoBoost Technology equipped engines produces 125 PS and 170 NM with Auto Start-Stop technology. The 1.0L Turbo engine has bagged the award for being one of the best engines in the market today. You can expect great acceleration, strong torque and excitement when driving it. As a matter of fact, the engine is so small that its only a size of an A4 paper.

Power delivery is quick and nimble even at mid or low RPM's thanks to the combination of the 6-speed transmission. Steering response and drive comfort are above average thanks to the new larger wheels and transmission. Everything feels sharper but although feedback on the wheel alignment are sometimes difficult to figure out. The revised suspension and firmer spring rate contribute to the vehicle's all-over performance as well.

Overtaking shouldn't be an issue as power built up is much easier to achieve now on the new Ford EcoSport. Turbo lags are also addressed and ensure you smoother and quicker drive.

The Ford EcoSport sports the same engine as the Ford Fiesta, but don't expect the same output agile and sportiness since the EcoSport is bigger and heavier. Certainly, the Ford EcoSport can give you the confidence during split second acceleration thanks to its EcoBoost Technology.

The new Ford EcoSport provides better driving, more torque at your disposal and better fuel economy. The EcoBoost technology plays a great role in this, add to that the Start/Stop system which automatically turns off the engine and you got one powerful fuel-efficient engine.

The Ford EcoSport features cool aspects meant to make family drives more comfortable and satisfying. It features a USB port, Wi-Fi hotspot and a floating 8-inch touch screen display. The Ford EcoSport also comes with an enhanced seatbelts and airbags for safety purposes. It also features EPS (Electronic Stability Program) where the system helps keep the driver from losing control of the vehicle when driving on slippery roads or sudden swerves. It also comes with a Traction Control feature that prevents the tires from skidding.

The vehicle is fitted with an electric power-assisted steering (EPAS) system, which gives accurate steering with a natural and satisfying feel. The Ford EcoSport makes it easy to drive in narrow city streets or curved roads.

A glimpse of at the Ford EcoSport looks like it's so tough and is ready to pounce as it boasts of an amazing overall appearance. It's vivid aerodynamic makes it a good compact crossover with astounding fuel efficiency.

The new Ford EcoSport comes with a new front-end design that looks very aggressive. It now packs a new daylight running lamps, the front-grille looks identical with Ford's latest lineup which all in all gives it a better look than its predecessor. It either packs a 16-icnh steel or 17-inch alloy wheels. The side design remains the same though similar to the previous model since it is not a new generation rather than a mid-cycle refresh.

At the back of the new Ford EcoSport, not much has change aside from the newly designed spare tire cover. But It now features an integrated reverse camera which the past model didn't have.

The new Ford EcoSport looks significantly aggressive from its front headlamps, grilles and body lines. Though everything is not exactly changed, these upgrades serves a newer and better look compared to the previous model.

Inside the new Ford EcoSport, Ford redesigned the dashboard with simpler lines and dials. It is surprisingly better even for a mid-cycle change. It is more elegant while the touch and knobs are more purposely placed. The most noticeable change you'll see is the floating touchscreen that sport Ford Sync 3. It is one of the best infotainment systems available in the market today with fast response, smooth easy navigation, rear camera and is also Android Auto and Apple Car Play ready. There are 2 USB ports available upfront to charge or connect your device as well as a start/stop button.

The instrumental Cluster still sports the same design and coloring, most of the gauges stays the same, the Rev meter, Speedometer, Engine Temperature and Fuel gauge are all analog type. There's still a digital display in the middle that shows the trip meter and other information. You can easily keep your eyes on the road while driving as the angle and coloring is very easy on the eyes. Small compartments are also abundant for your accessories and baggage. The new Ford EcoSport also compliments the driving position by adding an arm rest for the driver's side.

The rear seat comes with abundant of space and is very comfortable. Both the front and rear seats come with better back support, the driver seat also comes with better lumbar support to stay comfortable during long drives, Cabin space is also great whether if its headroom or legroom. And if you prefer more light inside the cabin, Ford also offers a sunroof option for the new Ford EcoSport.

The Ford EcoSport has spacious and comfortable interiors despite its compact size and can seat up to five people. The rear seats can be flipped up 60:40 fold for an available rear space for the loaded cargo. The Ford EcoSport also comes with connected apps to use and operate via a state-of-the-art mono screen. The design of the interior has also been improved, with a better finish and leather steering wheel. The vehicle truly combines best in class levels of interiors stillness, a dynamic automatic climate control system and a smooth ride to give the passengers a delightful and pleasurable journey. The Ford EcoSport comes with 20 storage compartments and a glove box that you can put 6 cans of drinks and keep them cool. There's definitely more space available inside than what you can expect. Overnight luggage or bigger objects will definitely have no problem fitting inside the 2019 Ford EcoSport.

The vehicle also comes with a high sitting position that gives the driver good visibility of the road ahead. Its ground clearance of 200 millimeters means that the passengers won't have to worry about driving speed bumps and slippery roads. The Ford EcoSport should also be tall enough to handle accidental flooding in the road. These in return should help you drive around the city with confidence and a peace of mind. 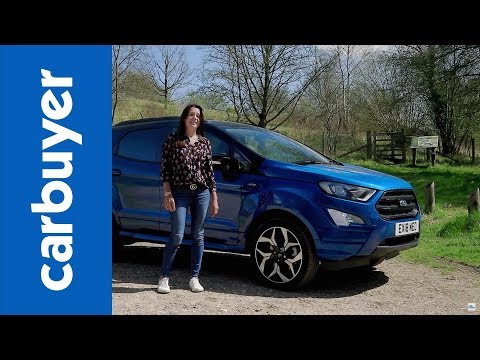 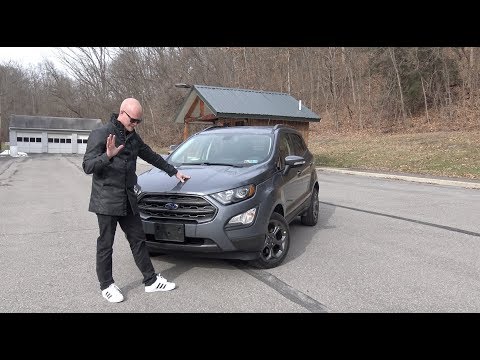